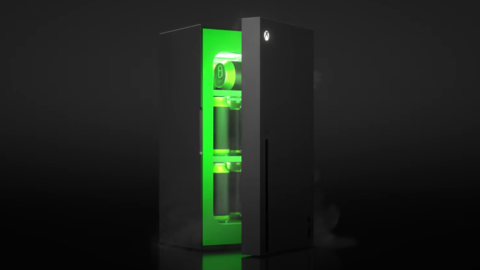 Microsoft is really leaning into the meme that the Xbox Series X looks like a fridge. The company capped off its E3 2021 briefing on Sunday with a brand-new trailer for the Xbox Mini Fridge. Yes. Really.

The “world premiere” trailer spotlights the fridge and its design for the first time. Honestly, it’s a delight. “For the first time in Xbox history, a new system that leaves others cold,” says the text in the hype video below, which stresses that the fridge is, in fact, a real thing that Microsoft will sell.

The design of the fridge is what you’d expect–it looks just like the Xbox Series X itself, except it’s a fridge. It appears to be able to hold about 10 12oz cans. Check out the trailer for yourself below.

There is no word yet on the release date or price for the Xbox mini fridge, but the trailer says it’ll arrive sometime this holiday alongside Halo Infinite. This is not the first Xbox fridge that Microsoft has created, as the company also made a full-size model and sent it to Snoop Dogg.

Microsoft’s Xbox E3 2021 briefing also included the announcement of Forza Horizon 5 and a release date for Starfield–which is exclusive to Xbox and PC. We also got to see Halo Infinite multiplayer for the first time and learned more about its maps and modes.