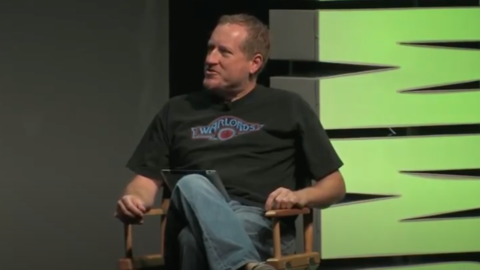 With Xbox celebrating its 20th anniversary this year, new behind-the-scenes stories about the console have been coming out. Another one was revealed on Monday, with Xbox creator Seamus Blackley revealing that the band Blink 182 encouraged him to chug an entire bottle of champagne on stage during an Xbox event many years ago.

In another tweet, Blackley said he feels lucky that this event–which was held in May 2001 in Hollywood–took place before the rise of social media where everything is documented. Blackley also shared that members of Blink 182 encouraged him “in a friendly way” after he introduced the band.

This took place at an after party at E3 that year. Blackley shared his story after someone else posted about the party and how attendees got metallic tickets to attend the “iParty.”

The original Xbox was released on November 15, 2001, so its exact 20th anniversary is coming up very soon. Microsoft is marking the occasion with an anniversary-themed livestream and with the launch of several products. To celebrate Halo, which also marks 20 years this year, Microsoft is releasing a Halo Infinite-branded custom Xbox Series X, as well as a translucent Xbox controller, and a special-edition headset.

The 20th anniversary Xbox livestream won’t have any new game announcements, but the event will be a “special look back at 20 years of Xbox,” Microsoft said.

Outside of the anniversary, Microsoft has a new piece of hardware coming this year–a mini-fridge. The Xbox mini-fridge, which plays off the joke that the Series X looks like a refrigerator, launches this year for $100. Preorders opened on October 19.

Blackley is now the CEO of Pacific Light & Hologram, a “tech startup in stealth mode.”