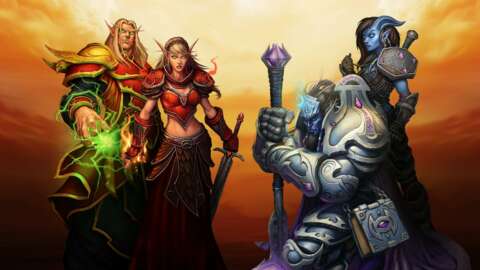 Blizzard will be testing out same-faction matchmaking for Battlegrounds this weekend in World of Warcraft: Burning Crusade Classic, in an effort to reduce lengthy matchmaking times for Horde players.

Since the launch of Burning Crusade Classic, Horde players looking to queue for Battlegrounds against the Alliance have been forced to wait in queues of up to an hour or more, making gaining Honor, a currency used to purchase PvP weapons and gear, almost impossible.

Why the long queue times? That’s because there are far more Horde players than Alliance, as Horde is perceived to be the better pick for PvP thanks to the powerful racial bonuses for Horde races like Orcs, Blood Elves, and Undead. Ironically, being better suited for PvP meant Horde players had to wait much longer to get into battlegrounds than their Alliance counterparts.

Blizzard will be enabling same-faction battlegrounds from July 2-6 to see its effect on the game. Battlegrounds will still prioritize matching teams of opposing factions, but if a team can’t be found in a timely fashion, the matchmaking system will pair up teams of the same-faction, albeit with the team playing out of the enemy faction’s base sporting masks and tabards representing the faction they find themselves fighting for.

“As soon as we saw Battleground queue times go way up a few weeks ago, we got to work on our options for addressing the situation,” Blizzard wrote in a post on the game’s official forums. “They’ve all been discussed here and elsewhere, as you know, and in addition to following your discussions closely, we looked at game history and data. What was most evident from all of your feedback was: players want to continue to play on their chosen side of the faction conflict, players don’t want to wait in long queues for BGs, and players don’t want a highly convoluted mechanism for getting into a BG.”

Same-faction teams won’t work on Alterac Valley, given the nature of the Battleground sees players battling various NPCs of the opposing faction. During the game’s weekly reset on July 6, same-faction matchmaking will be disabled while Blizzard analyzes data from the weekend and decides how to move forward.

It’s just the latest example of Blizzard showing it is willing to make various changes to Burning Crusade Classic not seen in the original landmark expansion, after following a strict “no changes” policy in regards to WoW Classic. Some of those changes, such as changes to Arena as well as rolling the game’s endgame content out in phases, have been met with general positivity. Others, like the introduction of a paid character boost and mount not seen in the original game, have been received less warmly.