After years and years of waiting, 343 Industries finally exhibited Halo Infinite’s multiplayer during the Xbox and Bethesda Games Showcase at E3 2021 and then immediately followed it up with an extended vidoc from the developers that revealed even more. Multiplayer is the bread and butter of the Halo series, and with the multiplayer adopting a free-to-play model this time around, fans were naturally wondering if (and potentially worrying that) things might go amiss due to loot boxes, pay-to-win, and other nasty elements. But from what I’ve seen and heard so far, 343 has laid those concerns to rest and I couldn’t be more excited about what Halo Infinite will have to offer later this year.

Starting with the basics of its gameplay, Halo Infinite brings back the tried-and-true Arena mode of 4v4 multiplayer and complements it with a bigger-than-ever Big Team Battle mode that now supports 24-player matches. From what we’ve seen so far, there appears to be a good variety of unique multiplayer maps in a variety of settings that cater to any number of different playstyles. In the vidoc, 343 said it will have more maps and modes to come over time, and I’m eager to see what else 343 has cooking to mix things up in an unexpected way, similar to the MOBA-style Warzone mode for Halo 5.

A big takeaway from the vidoc is that 343 is aiming to support Halo Infinite multiplayer not only for months to come after launch, but years, similarly to The Master Chief Collection. It’s new and exciting to think about Halo becoming more of a platform than a game, and it opens up a number of possibilities for where it might be headed in the future. Now, we still don’t know all the specifics–and no one outside 343 has actually played the game yet–but 343 is saying all the right things about Halo Infinite multiplayer, as I see it.

For one, Halo Infinite doesn’t appear to be chasing trends. There is no battle royale mode (not at launch, at least), and there are no Call of Duty-style killstreaks. Additionally, the loadouts from previous games appear to be gone, as 343 said in the and in the video that weapons will spawn on racks throughout the map. There are no loot boxes or any form of random items, either, which is a big relief and goes a long way toward calming my nerves about any potentially nasty business practices. Now, Halo Infinite is adopting a Seasons-style structure to its multiplayer, borrowing from the systems popularized by other free-to-play games like Apex Legends, Call of Duty: Warzone, and Fortnite, just to name a few.

And there will be cosmetics in Halo Infinite that you can buy with real money. But importantly, 343 says these cosmetics won’t impact gameplay and are purely that–cosmetic. In the vidoc, the developers spoke about crafting a custom Spartan soldier to make them unique, and in my eyes, this is a smart way to go about it because it allows players to express themselves with cosmetics (which do not impact gameplay) and 343 gets to reap the monetary benefits to (hopefully, at least) re-invest into the game to grow it even more. Now, it remains to be seen how the in-game economy will work, because right now they’re just words and ideas on paper–things could get out of whack–but 343 has said it’s committed to working together with fans to get things right.

This approach for customization should come as no surprise to Halo fans, as the latest seasons of Halo: The Master Chief Collection have leaned heavily on personalization by offering a huge number of new skins to help customize your Spartan to your liking. Now, the key difference is that Halo: MCC has no paid-for cosmetics–they are all unlocked through gameplay. But again, 343 is stressing that this system should feel fair and balanced in Halo Infinite, which is good to know.

It is nice to see 343 speak so transparently, but no one should be surprised. After the debacle that was Halo: The Master Chief Collection’s launch, the studio committed itself to improving communication and transparency with fans to avoid such a situation from occurring again. Fans of Halo: MCC have been treated to not only ongoing updates that have been so significant and impressive that the MCC of 2021 is basically MCC 2.0, but perhaps more importantly, the developer is freely talking to fans about its thinking behind the big changes. Even if the news isn’t good–as was the case when the team –the studio has informed fans about what’s happening and why.

I can only hope that this continues with Halo Infinite, and recent evidence suggests that it will. In a recent blog post, 343 acknowledged that, with Halo Infinite being a live service game, it has the space and opportunity to mold and evolve the game over time to help fans have a good experience. Naturally, the studio might make some missteps along the way. But the important piece here, as I see it, is that 343 says it is committed to working with fans to get things right, and I’m happy to hear that.

“We know the expectations and stakes are high and we may not get everything exactly to everyone’s liking on day one, but as a live service we’re committed to partnering with players to evolve the game together,” the developer said.

On the gameplay side, what we learned from the blog post and vidoc is that Halo Infinite’s sandbox multiplayer will have new and returning weapons, along with Halo 3-esque equipment, and of course, the new Grappleshot that players can use to zip around the map. Big Team Battle has been my favorite Halo mode over the years, and I’m excited it’s returning with Halo Infinite bigger than ever before with support for 24 players. Some of my most lasting memories from Halo have been in BTB, where seemingly anything can happen, leading to epic watercooler moments like . For Halo Infinite, 343 is mixing things up even more by having Pelicans fly in to deliver new vehicles throughout matches, while weapon ordinances will drop from the sky. 343 is also promising ranked and social playlists–which is good news, because sometimes you don’t have the energy for a white-knuckle ranked match and would rather sit back on your couch and sip a beer between deaths, (No, is that just me?)

Another new element of Halo Infinite that excites me is 120fps support. The shift from 30fps to 60fps in Halo: MCC was transformative. I could never go back. And I’m very intrigued to see how doubling that frame rate once again changes the “feel” and overall experience of playing Halo with Halo Infinite. This will, of course, require a monitor that can display at 120fps, so I’ll need to invest in a more expensive TV–thanks a lot, Microsoft.

One further part of Halo Infinite that is heartening is that it will indeed have split-screen multiplayer. Microsoft’s own statistics say that , and I don’t doubt that based on my own anecdotal evidence and observations. But I want the option to play split-screen. Thankfully, Halo Infinite will deliver split-screen support, even if split-screen has become more of an edge-case these days. 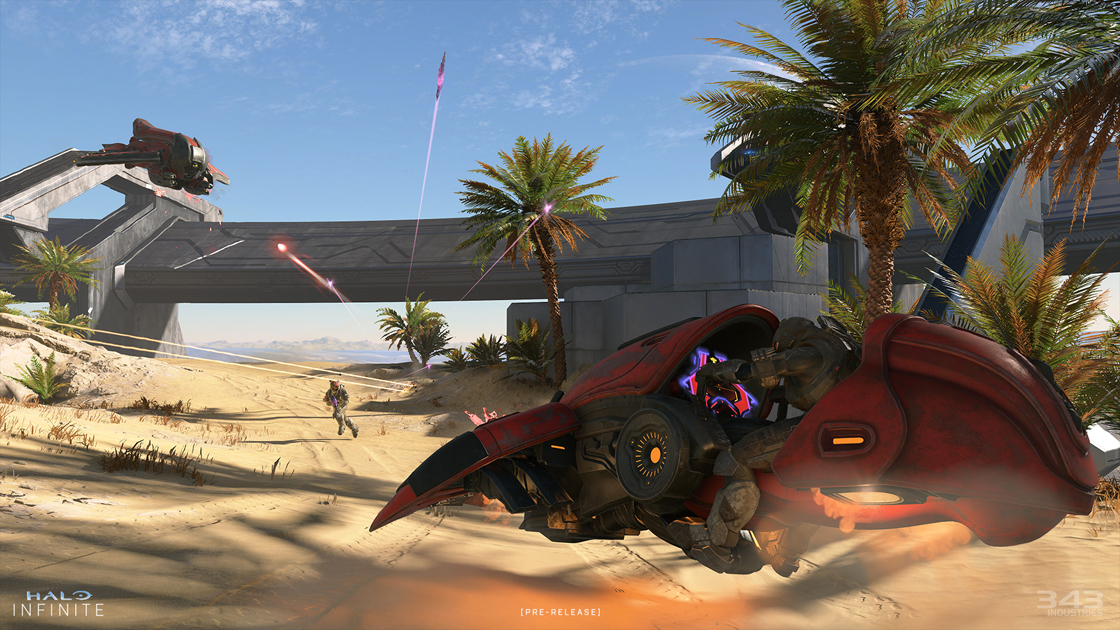 The free-to-play shift for Halo Infinite multiplayer is a big change, and I can appreciate the reservations and concerns some might have about this. But at the same time, free-to-play is potentially the best thing that could happen to Halo. After all, the series hasn’t seen a new release since 2015, so opening the door to literally everyone with an Xbox or a PC () is a massive step toward helping the franchise find its footing again and reclaim some of its former glory. And with its free-to-play model, 343 is actively encouraged to, simply put, make the game good. Because that’s the only way people will keep playing–and spending money. Those who download Halo Infinite’s multiplayer and don’t like what they see can simply hop out and they have not lost a penny thanks to the new free-to-play model.

Halo Infinite will also have a new multiplayer tutorial mode of sorts called The Academy, which will teach players the basics of Halo and help get them up to speed. It fits naturally into the new free-to-play model, whereby people who have never played Halo are likely to join the fight this time. Halo is a twitch-based shooter that rewards skill and strategy, so being able to train against bots is a big deal, not only for newcomers, but for players like myself who have always wanted a way to hone their skills in a non-online environment.

As a lifelong fan of Halo, I’m very excited to see this next chapter in the franchise’s trajectory with its free-to-play model and how it’s shaking things up on the gameplay side. It’s too soon to say how Halo Infinite multiplayer will actually land, but I’m encouraged by what I’ve seen so far and am very eager to check out the beta this summer (please let me in)

“You Have To Be Vulnerable” When Creating Art, Says Spiritfarer Creative Director