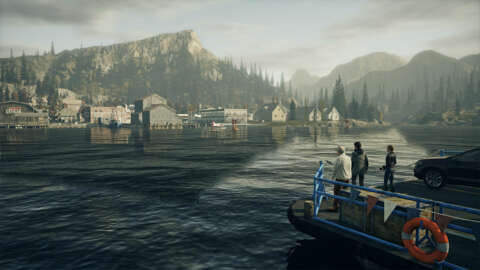 Alan Wake Remastered is releasing this week across console and PC, and if you want to play it as soon as possible, Remedy has now announced precisely when it goes live.

The game releases October 5 at midnight local time, in all regions and on all platforms. So no matter where you live or what platform you’re on, you can start downloading the game at midnight to get started on your journey.

Alan Wake Remastered is the same game you may remember from 2012 but it now has 60 FPS and 4K support, along with all DLC (The Signal and The Writer) and new commentary from director Sam Lake. Speaking of Lake, he has been on the promotional circuit drumming up hype for Alan Wake Remastered. Recently, he did this:

Remedy worked alongside developer d3t to make Alan Wake Remastered, with the aim of retaining the legacy of the game and bring it to a new generation.

“Those of you who are looking to revisit the quaint town of Bright Falls to experience a tale close to your heart, do not fret–Alan Wake Remastered will not alter what’s held dear by so many of you. We know that rewriting history has its consequences, and just like you, we’re not looking to bring the Dark Presence our way prematurely,” Remedy said. “Instead, Alan Wake Remastered brings back what you know and love in an elevated state, to give fans and those new to the tale alike a chance to experience Alan Wake in a new light.”

Alan Wake Remastered for PC is only available on the Epic Games Store because the Fortnite studio funded the game and has a timed-exclusivity deal in place. Remedy and Epic are also reportedly working on Alan Wake 2, but it has not yet been confirmed.