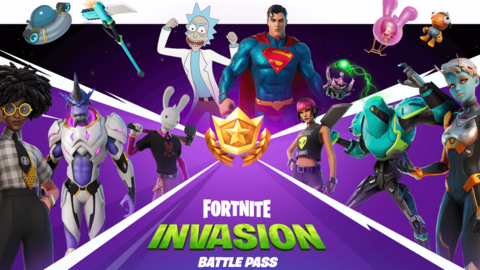 Fortnite Season 7 has arrived and it’s bringing a science-fiction spin to the island of Apollo, including new weapons, new vehicles, and of course a few more licensed crossovers with some of the world’s most popular alien-related franchise, including Superman himself, as well as Rick Sanchez from Rick and Morty. Alongside unvaulted weapons, new UFO vehicles, and more, here’s everything that’s new in Fortnite Season 7.

You can check out the new Battle Pass trailer below, showing off what’s coming to Fortnite in the new season, while the cinematic story trailer is also embedded in this story.

The new Battle Pass for Fortnite Season 7 includes eight new characters like most that have come before it. Epic originals like Sunny, the disgruntled rock star, and Joey, a double agent who can swap between alien and human forms with a built-in emote, make their Fortnite debuts.

Rick Sanchez of Rick and Morty fame will also make his belching debut on Apollo for Battle Pass owners, as will Superman, who represents Season 7’s midseason unlockable character. That means the Justice League’s leader will also include his own special challenges later this season. While not as recognizable as the others, a third tie-in character, Guggimon, is coming to the game as well. Guggimon is a “fashion horror artist” and a digital celebrity on platforms such as TikTok and Instagram.

For lore-chasers, the leader of the IO will make his debut as a playable character. Dr. Slone and the Imagined Order represent the opposition to the aliens invading the island this season, and no doubt his related cosmetics will help fill in some storyline gaps for the players deep into the game’s expansive lore bible.

The final Battle Pass character is Choppy, a battledroid designed by the aliens. It seems the IO-alien war will rage all during the season, with players unlocking soldiers from both sides. Along with these eight characters come new cosmetics for each of them, such as Back Bling, Gliders, and more for the first 100 tiers. Enlightened Skins likely await players who exceed that soft limit and continue climbing to tier 220, though Epic hasn’t revealed those yet.

Epic has brought back Battle Stars for this season’s challenge system, which allows players to unlock Battle Pass items in an order of their choosing. Players will no longer be bound by Epic’s default tier list, with the exception of Superman, who won’t be unlockable until later this season.

It wouldn’t be a new season of Fortnite if the changes were merely cosmetic. Fortnite Season 7 brings several new ways to play, including new sci-fi weapons from both sides of the IO-alien war, new vehicles, and a revamped weapon crafting system.

Players can equip some of Dr. Slone’s invented weapons never before seen in the game. This includes things such as the Recon Scanner, which players can use to survey their surrounding area, the Rail Gun, which can blast right through structures, and the new Pulse Rifle, which brings a sci-fi twist to the assault rifle weapon class.

On the alien side of the battlefront, players can shoot down or hijack their UFOs. When piloted, these saucers can toss around vehicles below or pick up things such as building materials and other supplies. Players in squads can also fire out of the UFOs as they could before with Choppas.

Weapon crafting returns for the second consecutive season, but it takes on a decidedly different look. The teeth and claws of the Primal season no longer make sense with the science fiction theme, so Fortnite players will now collect Nuts and Bolts to allow them to craft new weapons, including previously vaulted items. With enough Nuts and Bolts, players can craft things like the Burst Assault Rifle, the Lever Action Shotgun, and the Rapid Fire SMG, each of which has been vaulted since Fortnite Chapter 2 Season 5.

We’re still uncovering more secrets of Fortnite Season 7, so stick around as we break down more of what’s in store for this season’s invasion.