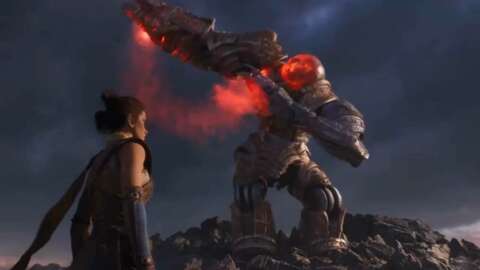 The Unreal Engine 5 officially launched into early access this week, and for developers who have begun digging deep into the software, they’ve discovered a number of new next-gen features to take advantage of and a hidden bonus that harkens back to one of the oldest Easter eggs in the gaming industry.

As discovered by Jon Terp on Twitter and confirmed by Epic, inputting the famous Konami Code in the Valley of the Ancient demo will result in the nearby giant robot activating its deadliest mode: dabbing. All you have to do is enter Up, Up, Down, Down, Left, Right, Left, Right, B, A in the demo and the robot will start dabbing for the rest of eternity.

Unreal Engine 5 was first unveiled last year in a fancy showcase video and is now available in a demo form so that developers can get an early access hands-on taste of what Epic’s new game-building software is capable of.

Several upcoming games have already begun using Unreal Engine 5, such as Hellblade II: Senua’s Fate and the recently-revealed Dragon Quest XII: The Flames of Fate, while Gears of War developer The Coalition recently announced that it was focusing full-time on next-gen game development and had begun learning how to use Epic’s powerful new engine. Epic’s mega-popular Fortnite will also be switching to Unreal 5 for its console versions in the near future.

For more on just how transformative this latest iteration of the software will be, you can check out more details in our interview with Unreal Engine senior technology designer Chance Ivey and VP of engineering Nick Penwarden.