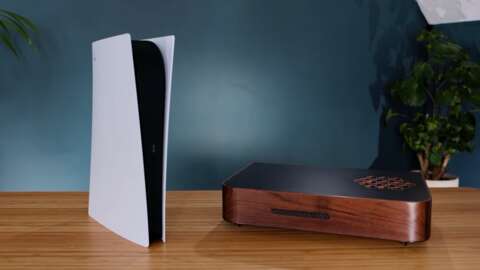 A redesign of the PlayStation 5 from YouTuber DIY Perks takes the console from big and clunky to extremely unassuming. PC builders know designs like these as stealth builds. Builders approach projects like these with the goal of taking an extremely powerful machine and packing it into something low-profile. Sometimes that means an older PC case, but for DIY Perks and his PS5 redesign, the goal was moving the console into something that would look nice in a media console.

The project started with losing the most divisive part of the PS5, its outer shell. Its internal components were then fitted onto a carbon fiber plate, which serves as the bottom of the console. DIY Perks then opted to use American dark walnut wood for the sides of the console, a rich wood that was made more vivid thanks to some treatment with beeswax.

The console’s top was also made with carbon fiber, with special care given to make sure the PS5 fan would have space to breathe. The YouTuber CNC’d (cut with a machine using a pre-programmed design) a hexagonal mesh into the carbon fiber plate right above the fan. Four cone-shaped feet were then attached to the bottom of the console and the build was complete. Altogether, it’s an extremely impressive redesign of Sony’s latest console, especially considering what it usually looks like.

An official PlayStation 5 redesign may also on the way, just not how you would expect. According to a report, Sony is giving some serious consideration to changing the internals of its console, which could potentially include switching out its CPU.

If you want to change up your PS5’s look but don’t necessarily have the same tools as DIY Perks, some retailers are now offering different skins and plates for the console. Likewise, Sony has announced two new DualSense controller colors, Cosmic Red and Midnight Black.