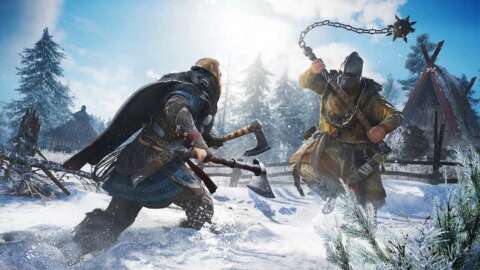 The entire Assassin’s Creed saga is on sale during the promotion, including the Animus Pack, which contains every Assassin’s Creed game besides Valhalla. The Animus Pack is up for grabs for $121.90. You can snag Assassin’s Creed Valhalla, the latest game in Ubisoft’s long-running historical action series, for $45. Valhalla’s Gold edition is discounted to $75, while the Ultimate edition is $90. Alternatively, you can buy the Mythology Pack–Valhalla, Odyssey, and Origins–for $64.

With Far Cry 6 releasing later this year, it’s a great time to catch up on Ubisoft’s over-the-top first-person shooter franchise. Far Cry 5 is discounted to $9, New Dawn is $10, and Far Cry 4 is only $6. You can also grab the Far Cry Platinum Pack for only $58.80. It comes with every Far Cry game and DLC packs, which means you’re getting eight games for under $50 (after using the promo code).

Ubisoft’s Watch Dogs franchise is also steeply discounted, with Watch Dogs: Legion on sale for $30. You can pick up the Gold edition, which contains the season pass and the original Watch Dogs, for only $50. Meanwhile, Watch Dogs 2 is discounted to just $10.

Other notable deals in the Ubisoft Forward sale include The Division 2’s Warlords of New York Edition for $18, Rainbow Six Siege for $8, Immortals Fenyx Rising for $20, Ghost Recon Breakpoint for $9, and Ghost Recon Wildlands for $15.

Thought the Ubisoft Forward sale primarily focuses on PC game deals, there are other console-centric sales to browse. The PlayStation Store is currently hosting two big sales: Double Discounts and Indies. The Xbox Store will kick off its annual Deals Unlocked sale tomorrow, June 11. Also, Prime Day 2021 is right around the corner, and we’ve already rounded up the best Prime Day deals so far.