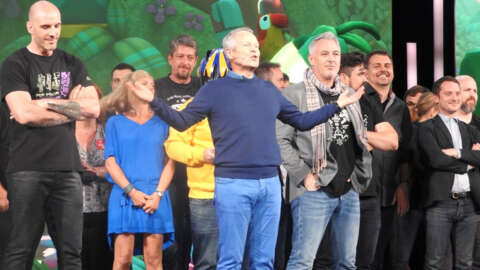 Yves Guillemot, CEO of Ubisoft, has released an internal letter in response to the hundreds of company employees who signed a letter in support of Activision Blizzard workers who staged a massive walkout on Wednesday, July 28.

In the statement, which was shared with GameSpot, Guillemot said Ubisoft wants to “reiterate our commitment to creating real and lasting change” at the company. He ran through a list of actions Ubisoft has taken in the wake of last year’s sexual harassment allegations and toxic workplace accusations. This includes revamping HR processes, installing a new code of conduct, rolling out mandatory training regimens, and hiring new leadership.

Guillemot also talked directly to the employee letter. He said that upper management understands employees want to improve working conditions at Ubisoft, reiterating that this commitment is a priority for everyone involved.

“Yesterday’s letter expresses concern from employees who want to make Ubisoft a better place,” Guillemot said. “We have heard clearly from this letter that not everyone is confident in the processes that have been put in place to manage misconduct reports. This is a top priority for Anika [Grant, Ubisoft’s Chief People Officer who was hired this past April], who continues to ensure they are robust and independent. In addition to our current processes, we are currently recruiting a new VP Global Employee Relations.”

The letter, which Axios reporter Stephen Totilo states has now been signed by almost 1,000 Ubisoft employees, praised Activision Blizzard workers for organizing a huge walkout to protest the misogyny and sexism that facilitates a “frat boy” culture at the latter game publisher. Simultaneously, the Ubisoft employees called out their own publisher for giving abusers copious second chances.

“It should no longer be a surprise to anyone: employees, executives, journalists, or fans that these heinous acts are going on,” the group of Ubisoft employees said. “It is time to stop being shocked. We must demand real steps be taken to prevent them. Those responsible must be held accountable for their actions.”

Activision Blizzard is at the center of a recent lawsuit filed by the California Department of Fair Employment and Housing that accused the company of creating a culture that demeans and exploits women and people of color. Activision Blizzard–and various current and former executives–have responded in dizzying ways, which ultimately led to a bunch of apologies.

As many of you know, an open letter signed by current and former Ubisoft team members was published yesterday. For those of you who didn’t see it you can find the article here along with our external statement. This letter expressed strong support for the developers at Activision Blizzard and advocated for large-scale change within our industry. It also raised concerns about Ubisoft and our culture. We reviewed this letter as a leadership team, and we take the issues it raises seriously. For this reason, I want to personally reiterate our commitment to creating real and lasting change at Ubisoft.

We have made important progress over the past year. Since last summer we have implemented new anonymous reporting tools, revamped our HR processes including new global policies to prevent and manage discrimination, retaliation, harassment, installed a new code of conduct, rolled out mandatory training, established a content review group and are bringing in new leadership across major studios, HR, D&I, Editorial and Production. These are important steps forward, but this is a long process, and there is still more work to be done.

Yesterday’s letter expresses concern from employees who want to make Ubisoft a better place. We have heard clearly from this letter that not everyone is confident in the processes that have been put in place to manage misconduct reports. This is a top priority for Anika, who continues to ensure they are robust and independent. In addition to our current processes, we are currently recruiting a new VP Global Employee Relations.

I have always valued free expression at Ubisoft, and I strongly believe this is key for us. This is why last year we launched more than 300 listening sessions with 1500+ team members as well as the company-wide survey and global audit. The feedback from these initiatives has been invaluable in driving our plan forward, and we will offer new sessions for you all to share additional thoughts and feedback on these topics. A new company wide survey (formerly known as Express Yourself) will be launched before the end of the year. We will also continue to empower our Employee Resource Group (ERG) network, by creating more visibility, and leadership support to keep bringing new ideas and initiatives to the table.

You can expect another update in Q3, including next steps on the Values Project, D&I and our HR roadmap. I encourage you to keep sharing your feedback and experiences; you can get in touch with me personally, speak with your management or share comments on Mana. Myself and the entire leadership team is committed to building a better Ubisoft for all of us.