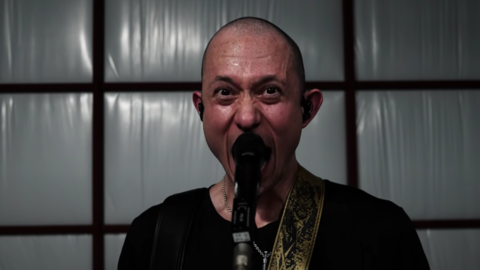 Trivium’s new music video for their latest single, “The Phalanx,” is a mash-up of metal and video games, and specifically The Elder Scrolls Online.

“What happens when Trivium and The Elder Scrolls Online collide?! We bring you our new music video and single for ‘The Phalanx’!” singer and guitarist Matt Heafy said.

The music video, which you can see below, features cinematics from ESO’s Gates of Oblivion content cut in with the band performing “The Phalanx” in a warehouse.

In August, Bethesda and Trivium announced a marketing deal for the two companies to work together on various initiatives.

Heafy told NME that he has been a fan of The Elder Scrolls and Fallout for a long time. “Sometimes I wonder why I’m so into the imagery that you see in some of the greatest fantasy games out there, and I think it’s related to the fact that I got into games before I got into music,” he said. “I’ve always felt that games and metal are so synonymous, that they draw the same kinds of people–the underdog–into these fantasy realms.”

The Elder Scrolls Online’s Deadlands expansion releases in November. As for Trivium, the band’s In the Court of the Dragon album releases on October 8.

The Elder Scrolls Online Next-Gen Update Delayed By One Week