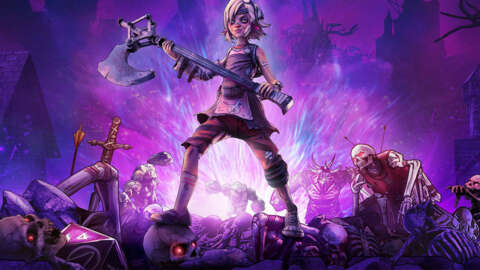 Tiny Tina’s Assault on Dragon Keep, the final DLC expansion that was released in 2013 for Borderlands 2, will relaunch this week on PS4, PS5, Xbox One, Xbox Series X|S and PC as a standalone title. On PlayStation and Xbox, the game will set you back $10, but it will be free until November 16 on PC through the Epic Games Store.

In case you missed it when it first launched nearly a decade ago, Tiny Tina’s Assault on Dragon Keep is Dungeons & Dragons as viewed through a Borderlands lens and is widely regarded as the best expansion that Gearbox’s loot-‘n-shoot sequel had to offer.

Beyond poking fun at the strategy genre and banishing Mr. Torgue to the stockades, the campaign was also a touching send-off for one of the characters who perished during the events of Borderlands 2, allowing explosive weapons expert Tiny Tina to gain some closure in the process.

While the expansion had some genuinely heartwarming moments, its minute-to-minute gameplay was also a fantastic mix of magic, enchanting locations to explore, and an arsenal that could take out the dread Dragon Lord. Gearbox Software said in a statement that the re-release will feature brand-new loot and cosmetics.

This re-release comes a few months before the launch of Tiny Tina’s Wonderlands, another Borderlands spin-off that also has a fantasy bend to its design and features a multiclass system that allows you to experiment with six different character skill trees such as the Stabbomancer and Brr-Zerker.