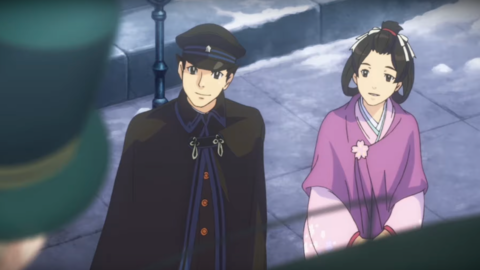 The Great Ace Attorney, the prequel in the Ace Attorney series coming on July 27, got a new gameplay look at Capcom’s E3 2021 presentation. In a pair of trailers, Capcom promoted the upcoming adventure game, and detailed a few of the new tools you’ll use to sniff out the truth from suspects and jurors: the Dance of Deduction, and Summation Examination.

In the Dance of Deduction, protagonist Ryunosuke Naruhodo will team up with London investigator Herlock Sholmes to volley back and forth to unravel the truth behind the lies a witness is telling. We see one such scene in action, slightly spoiling the reveal that a character isn’t who they seem to be.

In Summation Examination, Ryunosuke can target individual jurors to pick apart their inconsistent logic, and even pit them against each other to prolong the trial. That means you’ll be working to slowly convince six different people to your line of thinking, all of whom may be bringing their own perspectives and biases to the court.

The Great Ace Attorney has 10 cases in all, with eight mini-episodes. It packages in two previously Japan-only releases, The Great Ace Attorney: Adventures and The Great Ace Attorney 2: Resolve. As you might suspect from the fashion and on-the-nose Sherlock reference, it takes place in the 19th century. Instead of trusty Phoenix Wright or Apollo Justice, it stars Phoenix’s ancestor. And if you just want to soak in the story visual-novel style, it sports an “auto-advancing” feature to select the evidence and dialogue choices for you.