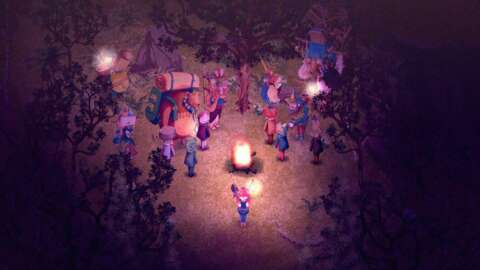 Developer carrotcake has announced The Garden Path, an upcoming slice-of-life sim where you play as a gardener. It looks really cute.

As seen in The Garden Path’s announcement trailer, the game sees you dutifully tend to a garden, make tea, fish, decorate your living space, and befriend both the assortment of travelers (who all have animal heads) that wander by and the inhabitants (who all have vegetable heads) that settle down around you.

Though there are tasks to complete and errands to run, The Garden Path is designed to be a low-pressure experience. If you want to go for a five-hour binge, you can, but checking in on your garden for 20 minutes a few times each week works too.

Similar to Animal Crossing, The Garden Path is beholden to an internal clock. As time passes in the real-world, so too will it in the in-game world. So the seasons will change, your garden will grow, and new folks will appear for you to meet.

If The Garden Path’s hand-drawn storybook aesthetic and beautiful original soundtrack strikes a chord with you, you won’t have to wait too long to play it yourself. The Garden Path is scheduled to launch for PC later this year, with announcements for additional planned platforms coming later. You can wishlist The Garden Path on Steam.