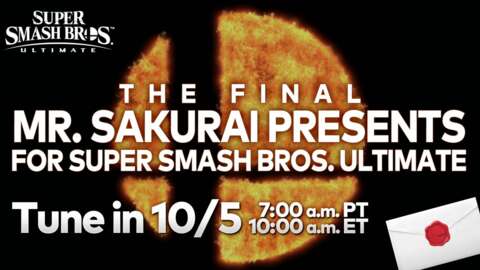 The final DLC reveal for Super Smash Bros. Ultimate is coming soon, and the game’s director Masahiro Sakurai thinks everyone who loves video games should tune in, even if you don’t play Smash.

Sakurai posted a comment about how this event will appeal to all video games fans via his Twitter, saying “whether you’re a Smash Bros. player or simply love games, make sure to tune in!”

One more day until the last DLC fighter for Super Smash Bros. Ultimate is announced.
Whether you’re a Smash Bros. player or simply love games, make sure to tune in!https://t.co/gV1B8eYROw

This is not the first time Sakurai has claimed the reveal will have a more universal appeal, calling it a “celebration of gaming” in a Tweet posted over the weekend.

While this has fueled speculation of who the final fighter will be–with names like Sora from Kingdom Hearts and Master Chief from Halo among the most-popular guesses–Sakurai gave no direct hints as to who will be joining the fight. The official Japanese Smash Bros Twitter has encouraged fans to let their imaginations “run wild” so let your voices be heard, Bubsy fans.

The final Super Smash Bros. Ultimate livestream is set for October 5 at 7 AM PT / 10 AM ET on the official Nintendo YouTube and Twitch channels. The 40-minute event will include the character reveal, a full walkthrough of their abilities, new Mii costumes, and more. Each DLC character pack has included a new stage and music, so those belonging to the new mystery fighter will likely also be revealed. Finally, the official release date of Challenger Pack 11–the final DLC for Super Smash Bros. Ultimate–has been confirmed by Nintendo to be part of the presentation.