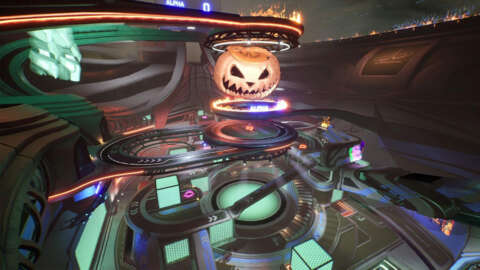 Ian Proulx, the co-founder of 1047 Games and the creator of Splitgate, has shared several new updates for the multiplayer FPS, including a new Halloween event, while also hinting at new gameplay features coming to the game in the future.

In a new Xbox Wire post, Proulx revealed Spookygate, a Halloween-inspired event that is available now until November 1. The event features new menus, skins, and a Halloween theme for one of Splitgate’s maps, Stadium.

Spookygate will also include Halloween challenges that contain some community-submitted weapon skins that you can unlock until the event ends.

The co-founder also teased that this is just the beginning for Splitgate updates, confirming that players can expect something this winter for the holiday season. He also revealed that the team has already started working on a map editor.

“Imagine playing a version of Karman Station with portal walls floating way out there in space with a building you can snipe from,” Proulx said. “Or think of the simulation maps where every wall can be portaled on. We can’t wait to see what you all come up with when this feature finally releases!”

The map editor is currently undergoing development and has yet to receive a release date.

In addition, Proulx also addressed the Xbox Series X|S version’s of Splitgate, saying that the team isn’t ready to share exact details at this time, adding, “if you’re familiar with other cross-generational titles, that should give you a good idea.”

He continued, confirming that the game will also be introducing new lore in the future, as well as teasing the fan-requested single-player mode, saying, “I can’t tell you how or when we’ll be revealing the universe of Splitgate yet, but it’s something we can’t wait to share with the world. All I’ll say for now is, stay tuned.”

Splitgate is currently available on PlayStation 4, Xbox One, and PC, as well as on PlayStation 5, and Xbox Series X|S through backwards compatibility. Although it was released in 2019, the game’s popularity took off a few months ago leading to server issues with long queue times.

Splitgate Season 0 Out Now With New Map And Mode