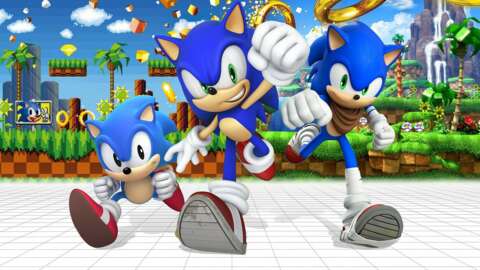 Roger Craig Smith will once again voice Sonic the Hedgehog in future games, as announced via the voice actor’s Twitter.

Smith, who voiced Sonic for more than a decade in various games and shows, stepped away/was removed from the role for unknown reasons back in January, when he tweeted an image of a broken in-half blue heart and wrote, “Onward to new zones! Much love to the fans who’ve been so kind. It’s been an honor.”

No reason for Smith’s departure was ever officially given, but some fans speculated the voice actor was being replaced by actor Ben Schwartz, who voiced Sonic in the 2020 live-action film and will do so again in its upcoming sequel, Sonic the Hedgehog 2.

Regardless, it seems like fan feedback revolving around Smith’s absence has brought the actor back, with Smith’s comeback tweet thanking the Sonic community for their passion and support. His tweet features an image of a stitched-back-together blue heart, a callback to his January tweet.

I can’t fully express my gratitude for the @sonic_hedgehog crew and community.🙏
I hope to honor your support and passion as I’m officially back voicing #SonicTheHedgehog in games.
Can’t wait for ya to see what we have planned!
THANK YOU…from the bottom of my blue heart.💙 pic.twitter.com/KOLi2MJnUi

Smith also writes that he “can’t wait for ya to see what we have planned,” which seems an obvious tease related to upcoming Sonic projects he will be involved in. It just so happens Sega is hosting a Sonic 30th anniversary stream on May 27, one which is said to include a first look at upcoming projects, events, and partnerships.

Perhaps Smith will be making an appearance during Sonic’s 30th anniversary celebrations. Though it was sad to see Smith step away from the role and fans are no doubt excited about his return, Sonic isn’t Smith’s only role in recent years. He has been the voice for numerous other iconic game characters as well, including Apex Legends’ Mirage and Resident Evil’s Chris Redfield.