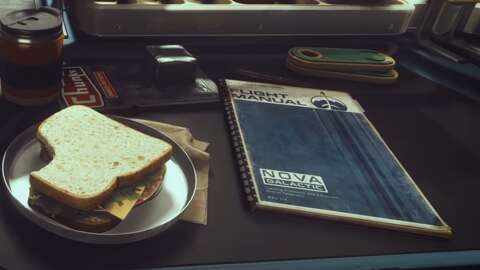 Starfield, the upcoming original title from Bethesda, may be set centuries in the future, but some things never go out of style–like a slice of cheddar cheese or salami. The oh-so-prominently featured sandwich from the Starfield trailer has attracted a decent amount of attention, and naturally, someone has figured out exactly how to make it.

The recipe for the Starfield “Space Sandwich” was put together by Victoria Rosenthal. Rosenthal runs a site called Pixelated Provisions, where she recreates the food players eat in games in real life. She is also the author of multiple cookbooks, including the official Street Fighter, Destiny, and Fallout cookbooks. Suffice to say, when it comes to recreating video game food, Rosenthal knows what she’s talking about.

Rosenthal’s full recipe shows just how a classic sandwich never gets old, even if you’re traveling through the stars. Apparently, the astronaut in Starfield was eating a salami and cheddar sandwich on white bread with pickled red onions, lettuce, and dijon mustard. In terms of sandwiches, it’s a granddaddy, a classic, and clearly it will outlast us all. If you follow the recipe step-by-step, the end result will be an undeniably tasty (and photogenic) lunch.

More details about Starfield have been revealed since its trailer was released at E3 by Bethesda Game Studios executive director Todd Howard. In an interview, Howard said that the game is going to be “a bit more hardcore of a role-playing game than we’ve done.” Starfield is currently set to release on November 11, 2022.