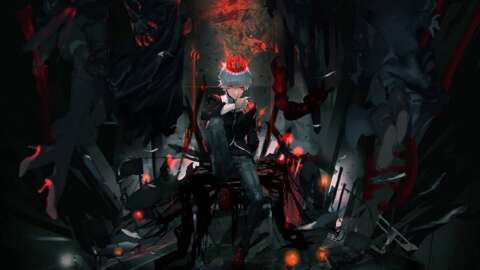 The announcement was revealed in a new trailer showcasing the different adversaries the protagonist will encounter in Monark. The first one is Kurama Hitotsubashi, who takes over as student council president after the previous student, Hinata Nozomi, was relieved of her role.

Subaru Ikariya is an unsettling first-year student who reads about the occult and the dark arts at the library every day. He’s also been threatening fellow students by claiming that he’s behind the weird events plaguing Shin Mikado Academy. Hayate Tsumabuki is an instructor at the academy who many students admire for his gentle demeanor.

There are also the Tono twins, Akane and Sumire. Akane is the older of the two and is nicknamed the “White Swan of Shin Mikado.” She has an innocent air about her and is lovesick. Sumire is the “Black Swan of Shin Mikado” and is quite flirtatious with men around the academy.

The last adversary shown is Yoru, a mysterious entity who appears in the protagonist’s dreams. Her appearance is obscured, being a black silhouette with glitched effects.

Monark was first revealed back in June, and NIS America shortly after confirmed PC as another release platform for the West.