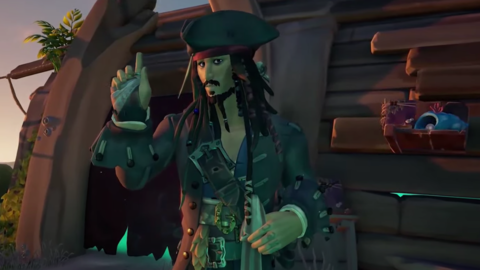 As promised, the first gameplay trailer for Sea of Thieves’ new A Pirate’s Life expansion has arrived, showing off more of the crossover with Disney’s Pirates of the Caribbean series.

The gameplay trailer shows Captain Jack Sparrow, Davy Jones, and other familiar characters from Disney’s franchise inside Sea of Thieves. We also get a peek at some of the new locations you’ll explore and some of the melee combat you can expect.

Additionally, Rare announced a special showcase for A Pirate’s Life coming up this Sunday, June 20, where it provide a deep dive look at the expansion. This will feature developers from Rare talking about their work on the series, while people from Disney will appear as well to discuss how the partnership came to be in the first place. The event begins at 11 AM PT / 2 PM ET on June 20; keep checking back with GameSpot for more.

A Pirate’s Life launches on June 22 as a free expansion to Sea of Thieves across console and PC.

In terms of the story, you’re on a journey to set Jack Sparrow free from prison so he can go after some treasure. His nemesis Davy Jones is hunting him down. According to developer Rare, Jack Sparrow and Davy Jones are “more than cameo appearances” in the expansion, so you should expect to see a lot of them.

Developer Rare is also working on a new IP called Everwild, but it was nowhere to be seen at E3. That may be due to how it was said to have been rebooted recently, according to VGC.