Skip to content
Homepage / Check it out / Ratchet & Clank: Rift Apart Has A Crossover Cannon In Its Arsenal 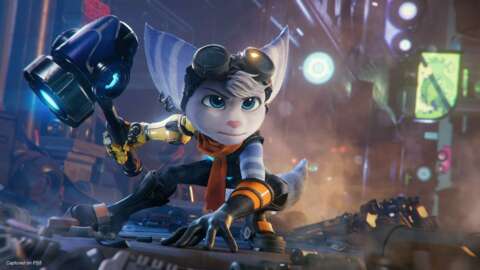 Ratchet & Clank: Rift Apart developer Insomniac Games has revealed one of the most powerful weapons in the upcoming PS5 platforming adventure, which is capable of ripping apart the fabric of reality and dropping items from other PlayStation games onto enemies.

Dubbed the RYNO-8, this weapon opens a portal into other dimensions, pulling in items such as the jeep from Uncharted 4, a Thunderjaw from Horizon: Zero Dawn, and Fizzie from Sunset Overdrive, which Insomniac says it owns the rights to.

Rivet: Look! The Seekerpede’s still on our tails! Use the RYNO 8! I got it working and right now it’s our only shot!

Even Sly Cooper from Ghost of Tsushima developer Sucker Punch can make an appearance through one of these dimensional rifts, which for now is the closest that fans will ever get to see the master thief in a PS5 game. Reviews will go live this week for Ratchet & Clank: Rift Apart ahead of its June 11 release.

The game is in full marketing mode currently, with Sony recently rolling out new gameplay and cinematic trailers for the interdimensional adventure. Like other PS5 first-party games, Rift Apart practically eliminates load times by using the console’s internal SSD, and if you’re interested to see what challenges lie ahead you can check out the Rift Apart’s trophy list.

Be sure to read our Ratchet & Clank: Rift Apart preorder guide for more on the game.