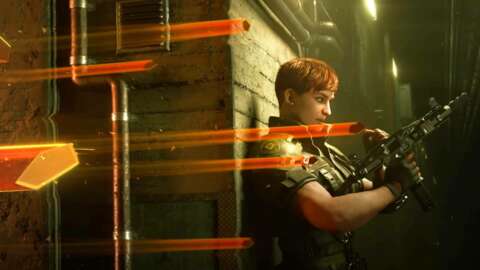 “Thorn’s gadget is called the Razorbloom Shell,” Rainbow Six Siege game designer Dominic Clément said during High Calibre’s reveal, which is embedded below. “It’s a sticky device you can throw pretty much everywhere on the map and it’s going to stick on pretty much any surface.”

As seen in Thorn’s reveal trailer, the Razorbloom Shell is a proximity-based gadget. Once placed, an attacker must wander into its range in order for the gadget to activate. Upon activation, the attacker has a brief window of opportunity to decide whether to push ahead, retreat, or destroy the gadget before it explodes. When used correctly, the Razorbloom Shell is designed to force attackers into panicking and moving without careful consideration, which can prime them for ambush.

“We wanted to iterate on the idea of a trap operator and trap gadget,” Clément said. “A lot of the gadgets that we have right now that are traps are pretty binary–either you walk into them and you get the effect or you don’t. So with this gadget, we wanted to see what happens when you give the players a little more time to react and you give them a couple options.”

Thorn’s Razorbloom Shell isn’t the only tool she’s bringing to Siege. The operator comes equipped with a brand-new weapon, which (currently) Thorn alone can equip and use. The new firearm is the UZK50GI, a small but hard-hitting submachine gun. If the new gun isn’t to your liking, Thorn can also equip the M870 as her primary firearm, a shotgun also used by Jäger and Bandit.

“Thorn is going to be mainly played as an anchor,” Clément said. “She’s very useful close to choke points. You want Thorn playing around her gadget because that’s where she’s the most deadly.”

Alongside Thorn, High Calibre also introduces a new HUD for Siege. Additionally, Outback will get a rework with a few notable changes made to the layout of the map. High Calibre makes improvements to Siege’s test server too. High Calibre has no official release date, but it will go live on Siege’s PC test servers on November 9. If the timeframe holds to tradition, the season will officially go live on all platforms a few weeks later.

Ubisoft Montreal announced all of this information days after ABetterUbisoft released a petition asking for industry-wide support in holding Ubisoft management accountable for needing to respond to allegations of abuse and harassment at the company across all of its studios. This petition was released on November 5, marking 100 days of no response from Ubisoft leadership in regards to a letter signed by hundreds of Ubisoft employees, past and present. The letter championed the Activision Blizzard staff walkout from earlier this year and also demanded that Ubisoft leadership needed to address the ongoing allegations at the company.