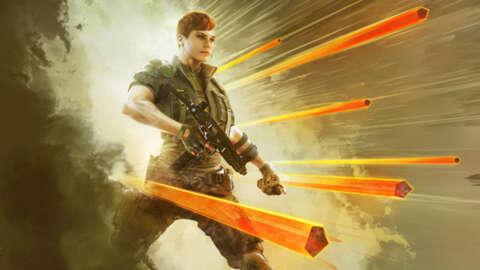 Official details on Thorn have yet to be released, but we get a decent look at her unique gadget in her reveal trailer. In the trailer, we see Thorn use a throwable, seemingly proximity-activated gadget that can stick to surfaces. When inert, the gadget is blue, but once the attackers close in on it, the device flashes red and after a brief delay it explodes into multiple pentagon-shaped pieces of shrapnel.

Based on the trailer, Thorn looks a lot like a more aggressive version of Kapkan. Instead of setting charges exclusively on entry-points and lying in wait, the trailer makes her out to be a more mobile defender that roams the map and baits attackers into falling victim to her unique gadget in carefully constructed ambushes.

In a lore-focused Ubisoft blog post, fellow operator Sledge says, in regards to Thorn’s gadget, “Territorial is one way to put it–walking into its warning zone is like a cactus kindly telling you that you’re about to step on it barefoot.”

Though Ubisoft’s talented team of developers continue pushing out content for games like Siege, upper management has not been forthcoming to employees’ demands to address allegations of abuse and harassment at the company. Current and former employees affiliated with ABetterUbisoft, a group demanding permanent change across the company’s many studios, recently released a petition asking for support. The petition was released following 100 days of no response from Ubisoft leadership in regards to a letter signed by 1,000 Ubisoft employees that both supported the Activision Blizzard staff walkout and demanded Ubisoft leadership address the ongoing harassment and abuse allegations from Ubisoft employees, past and present.

Rainbow Six Siege Is Free This Weekend On Xbox