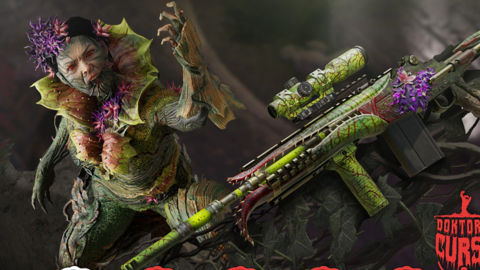 The special Doktor’s Curse mode features the usual 5v5 multiplayer, except that none of the characters have guns. Instead, the attackers all have access to a special sledgehammer and one of three gadgets to hunt the monsters down. Attackers can pick Jackal, Lion, or Sledge–who is equipped with Pulse’s Cardiac Sensor–to hunt down the monsters hiding in the castle.

On the defender’s side, each character also has access to their gadget and a secondary ability called Nightstride, which allows them to temporarily gain a speed boost and turn invisible. Defenders cannot attack, so they must survive to win the round. The defenders include Aruni as a carnivorous plant, Melusi as a howling ghost, Smoke as a sewer creature, Kapkan as a reaper, Frost as a demon, Lesion as a zombie, and Ela as a patchwork revenant.

All of the monster and attacker skins are included in the Doktor’s Curse collection for a total of 48 items. Items can be obtained by buying packs for 300 R6 Credits (roughly $3 USD) or 12500 Renown. Some items can be purchased as individual bundles for 1680 R6 Credits.

Why Rainbow Six Siege Moved Away From Its Counter-Terrorism Narrative