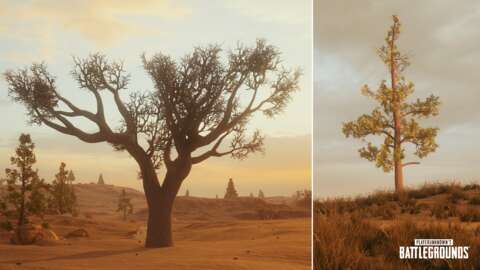 PUBG’s gone through a lot of changes since its initial release more than four years ago, and that means that some of its older maps are showing their age. In the game’s latest patch, Update 12.1, developer Krafton is rolling out a complete remaster of the big desert map Miramar.

The patch, which is now live on test servers, significantly improves the fidelity of all parts of the Miramar map in order to bring it up to the same level as the other maps. The studio is also modifying the environment alongside the fidelity upgrades for the purpose of providing an “overall smoother experience, with reduced object clutter, less troublesome coastlines, adjusted cover across the map, and more,” according to the patch notes.

Most of the map should remain familiar to veteran PUBG players. On the visual side, the developer has given a fresh coat of paint to buildings, objects, cliffs, and foliage, and it’s updated the map’s lighting. On the terrain and geometry side, one of the most noticeable changes is the addition of new cliffs to better indicate steep slopes. In addition, smaller, superfluous objects have been reduced throughout urban areas to make navigation easier. Check out some before-and-after shots in the video above.

The rest of the patch includes a variety of gameplay tweaks, fixes, and additions. It introduces a new vehicle, the Quad, which is a racing-style ATV with two seats that spawns on Miramar. In addition, pre-match lobbies will now include two soccer balls per player area, just for killing time before a round starts (they disappear once the round begins). Check out the rest of PUBG’s Update 12.1 patch notes at the bottom of this article.

Alongside the release of Update 12.1 to test servers, Krafton also teased two new maps coming to the game. The first, which is codenamed “Tiger,” is an 8-on-8 map and will launch in Q3 2021. This map will feature one of the biggest changes to core PUBG gameplay, too: a respawn system. The second map, codenamed “Kiki,” is further out with a planned release in Q4 2021 or Q1 2022. It’ll also be an 8-on-8 map and will feature a wide array of locations, “from mysterious underground labs and massive skyscrapers to swamplands and underwater buildings,” according to Krafton’s statement.

The Lynx AMR is PUBG’s first Anti-Materiel Rifle, a semi-automatic crate gun capable of damaging military equipment and armor, in addition to players and vehicles.

Intended as a hard counter to vehicles, the Lynx is also effective in any situations you’d find yourself wanting to scope in and shoot down an enemy.

The Quad is an off-road vehicle with four low-pressure tires and a driver seat designed to be straddled by the operator, with handlebars for steering control, with room on the back for a teammate.

All players eligible for Season 11 ranked rewards will receive them upon launching the game. Rewards are granted based on your end-of-season rank.

For more information on ranked rewards, click here. Season 12 rewards will be announced at a later date.

Introducing the Weapon Skin Upgrade System. Level-up your weapon skins and add new features and styles to your weapon; keep an eye out for Contraband Crates in store (purchasable with G-Coin). Materials used to upgrade skins can be purchased or found with a low probability via certain crates purchasable with BP and through community events.

With this update, bots will now jump from the plane similarly to other players and we’ve also made additional improvements to the underlying bot AI.

In the Hall of Fame building on Erangel, the PGI.S winners are now being showcased. Relive the excitement from PGI.S in-game.

The replay system has been updated. Replay files from previous updates are now unable to be used.