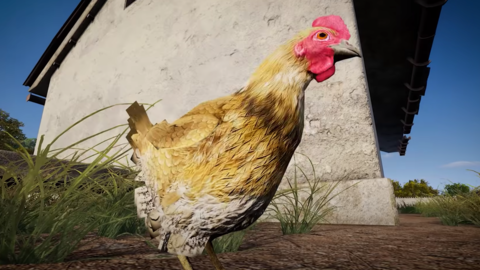 The newest update for the battle royale game PUBG has been detailed, and among its many new additions are chickens. The feathered friends now populate the Taego map, and they aren’t just there to add more detail to the scenery. Developer Krafton said it added chickens to the game to amuse players, but the little birds also serve a purpose from a gameplay perspective.

The chickens will squawk when you get close, or when they hear gunfire or advancing vehicles, thereby giving away your location. In a tactical game like PUBG where staying undetected plays a major role, this could be a big deal. As explained in the video below, you can silence the chickens by killing them.

Elsewhere, the new PUBG update–which launches on November 3 for PC and November 11 on console–adds a new weapon, the Mortar. Exclusive to the Taego map, this weapon fires a huge projectile and is deadly at a distance, but it requires a good deal of skill and accuracy. Players fire the mortar to a place where they anticipate the enemy to be. Krafton said the mortar might be especially useful to smoke out teams hiding behind ridges or in other places where grenades cannot reach.

Another new weapon is the M79 smoke grenade launcher, which players can use to give themselves cover to advance to a new position or to help rescue a downed teammate.

A new traversal feature is in the update, too. PUBG’s down-but-not-out state (DBNO) now includes swimming. Currently, anyone who is DBNO and in the water dies immediately, but with the upcoming update, players can swim in the DBNO state, thus improving their chances to survive until a teammate can revive them.

The full patch notes are available on the PUBG website, while a sampling can be seen below.

Our new M79 is a smoke grenade launcher that was created to provide quick smoke cover on longer ranges. Blind your enemies, cover your downed teammate or make a grand escape from a losing battle!

To improve the survivability of players inside water, we are now supporting DBNO Swimming. Previously a player who enters DBNO while in the water would skip DBNO and instantly die. This made any deep water a hazardous area to traverse. Now a player will instead enter Swimming DBNO, a slow swimming state which gives the player a chance to reach the shore and be revived by teammates. Hopefully, you’ll feel more confident next time you get into a Boat or swim across that river!

We are proud to introduce the Chicken, a new creature that will hopefully amuse many players during fierce combats in Taego! “Chicken? Why the heck?” you might wonder. The answer to this question is left to your imaginations.

Five new Taego areas have been added to the Team Deathmatch preset in Custom Matches.

Improvements have been made to Team Deathmatch Taego areas.

Based on community feedback, we have adjusted the Taego and Paramo rulesets and spawn tables to better suit the Ranked play experience.

※ Clipping issue: Graphics that are shown outside the visible part of an image/object.