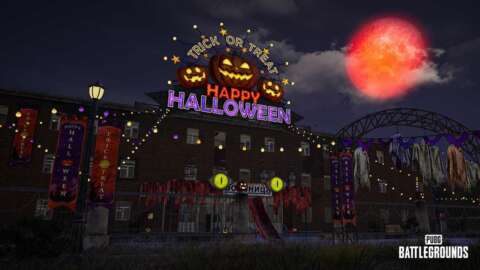 Just earlier this week, PUBG Studios revealed all the details of PUBG: Battleground’s 14.1 update. The patch was already released on PC and is now releasing on console. In the spirit of the season, PUBG: Battlegrounds has decorated the School, Hospital, and Starting Area of the Erangel map. Additionally, players might run into spooky Halloween weather, like a blood moon or zone drenched in fog.

The most significant changes, however, are to map design. For the Taego map, Kraften claimed to have analyzed a lot of player data, judging in which areas of the map players most often win and adjusting those areas to make them more fair. These changes include: adding additional cover to an area north of the Palace as well as the river east of Terminal, reorganizing topography in Buk San Sa and School, as well as general re-configuring of cover and hills across the map.

Taego also has a new feature: Error Space. Once these spaces are spawned, players can find map-exclusive loot and weapons within their confines. They will display on the minimap and remain active for the entire match. In custom games, players can set the number of Error Spaces that can appear, as well as whether they will appear at all.

Breakable pots are an additional new feature. Players can shoot them open or punch them for loot, but the noise might attract enemies. Pots can contain items like first aid kits or bandages, a variety of grenades/projectile weapons, and Hanbok Hats.

Comeback BR should also be easier to understand. The feature enables players to reenter the primary match after dying, but sometimes players would leave the lobby without knowledge that they were still eligible to compete. The UI now displays a warning message if a player tries to leave while spectating Comeback BR, disables the exit to lobby button for a brief time after death, and shows a timer counting down until the start of Comeback BR.

Players may now also pick up downed allies or enemies, allowing players to carry friends to safety or prevent enemies from reviving their comrades. They will act as something of a human shield, absorbing some damage that would otherwise be done to the carrier. In exchange, the carrier will not be able to jump, sprint, crouch, prone, or hurdle. Additionally, the carrier can only fire from the hip. The carried player can still look around and their bleed out time will be lowered.

The map rotation for both normal and ranked matches have also shifted. In normal matches you can expect appearances of the Erangel, Miramar, Sanhok, Taego, and Paramo maps. In ranked, you can find the Erangel, Miramar, Taego, and Paramo maps. In other changes, the update redesigns the Pochiniki landing zone on Erangel, updates the battle pass and cosmetics for Season 14, and adjusts the top speed of some vehicles.