Skip to content
Homepage / Check it out / Polybius Quarter Arcade Preorders Are Live: Own The Game That Never Existed 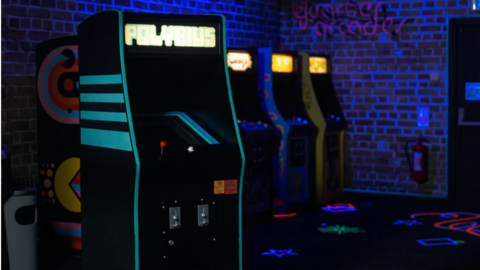 Polybius is an urban legend that has been around for a few decades, with stories detailing a supposedly mind-altering arcade game planted by the government in Portland, Oregon. No evidence exists to actually prove it was real, and in fact there is evidence to the contrary, but a cheeky scaled-down replica is available to preorder now.

Available from Numskull via its Quarter Arcades line, the Polybius replica costs $144 via preorder with an expected release date this August. It was previously available via Kickstarter (I backed it after trying to convince myself I didn’t need it) and because it’s not based on a real game, it doesn’t contain an arcade ROM like the other Quarter Arcades cabinets.

Instead, it plays spooky visuals and sound effects to hypnotize you and the back functions as a USB power hub. You can power up to 10 other cabinets via the ports, meaning you’ll only need one outlet on your wall in order to make your entire tiny arcade playable. It also comes in a “mysterious black box” as a nod to the urban legend.

Polybius is such a popular urban legend that it has made its way from arcade obsessives to mainstream pop culture, appearing as an Easter egg in shows like The Simpsons and The Goldbergs. YouTuber Stuart Ashen liked the story so much that he even made a feature-length film about it.

Numskull’s other Quarter Arcades games include Pac-Man 40th Anniversary, Galaga, Galaxian, and Dig Dug. You can check them all out on the official website.