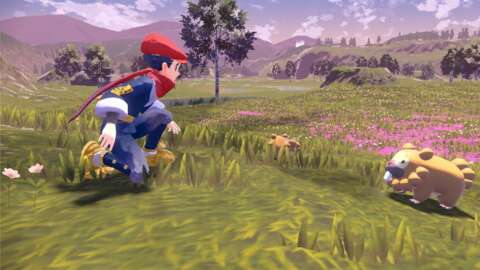 Ever since the reveal of Pokemon Legends: Arceus, fans have noted the similarities between it and The Legend of Zelda: Breath of the Wild, with many assuming the upcoming Pokemon title would borrow the latter game’s open-world exploration. That is not the case, with The Pokemon Company now definitively confirming how exploration in the world of Pokemon Legends: Arceus will work.

In a statement to Kotaku, The Pokemon Company states that players set out from a central hub village, before accepting missions and venturing forth into different “open areas” of the Hisui region. They’ll then return to the village when their task is complete. Below is the full statement:

“In Pokémon Legends: Arceus, Jubilife Village will serve as the base for surveying missions. After receiving an assignment or a request and preparing for their next excursion, players will set out from the village to study one of the various open areas of the Hisui region. After they finish the survey work, players will need to return once more to prepare for their next task. We look forward to sharing more information about exploring the Hisui region soon.”

That makes Pokemon Legends: Arceus sound less like a Pokemon version of Breath of the Wild and closer to Capcom’s Monster Hunter series, which has players departing a central hub to venture out to specific regions of the world for hunts. Players will be able to set up a base camp once within a specific region, and it doesn’t seem as if they’ll be able to walk to another region of the map on foot without first specifically departing for that region from Jubilife Village.

Almost everything we currently know about Pokemon Legends: Arceus came from special Pokemon Direct back in August. The game takes place in the distant past of the Pokemon universe, where concepts like Pokemon trainers and gyms don’t yet exist. There will of course be new Pokemon to discover, including numerous region-specific variations of existing Pokemon. Pokemon Legends: Arceus is currently slated to release January 28, 2022 for Nintendo Switch.

Hisuian Zorua And Zoroark Have Been Confirmed For Pokemon Legends: Arceus

Pokemon Legends: Arceus Introduces Yet Another Pokemon With A Messed-Up Backstory