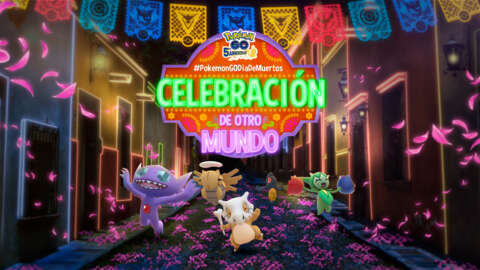 Last year, Pokemon GO celebrated Día de Muertos, or the Day of the Dead, with a special mini-event for trainers in Latin America and the Carribean. This year, players around the world will get to join in on the festival, which originated in Mexico with its roots tracing back to ancient Aztec traditions.

The event will start on November 1 at 10 AM in trainers’ local time, and run until November 2 at 11:59 PM. While all players around the world will get to participate in the event, trainers in Latin America and the Carribean will get a handful of extra bonuses.

The bonuses applied globally include a buff to both Lure Modules and Incense, which will each last for 90 minutes for the duration of the event. Players will also get double stardust for every catch while the event is running. The extra bonuses for Latin American and Carribean players include a bonus Candy for every transfer, and a higher likelihood of featured event Pokemon appearing in the wild, or being attracted by Incense or Lure Modules.

The featured event Pokemon include a number of Ghost-types, but also flower-themed Pokemon, in a reference to the role the cempasúchil flower plays in real-world Día de Muertos celebrations. The full list of featured Pokemon can be found here, but it includes the likes of Cubone and Sunkern, with others like Sunflora and Yamask appearing more rarely. Alolan Marowak can also be attracted with Incense and Lures, as well as encountered by completing Field Research tasks.

All players will be getting a free gift from the event, which will consist of a freebie box with 20 Poke Balls and one Incense, as well as a free event-themed t-shirt for player avatars.