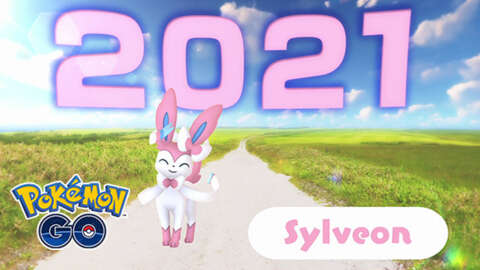 Sylveon has arrived in Pokemon Go. The Fairy-type Eevee evolution is now available as part of the Luminous Legends Y event, making this your first chance to get one in Niantic’s mobile game. Like other Eevee evolutions, there are a couple of methods of getting the new Fairy Pokemon, so here’s a rundown on how to evolve Eevee into Sylveon in Pokemon Go.

The standard way to evolve Eevee into Sylveon is simply to earn enough hearts with it while it’s set as your Buddy Pokemon. You’ll earn hearts with Eevee by feeding, playing, and taking snapshots of it. You’ll need to earn 70 hearts for it to evolve into Sylveon, however–so while this process is straightforward, it’s also a bit time-consuming. Once you’ve earned 70 hearts, the question mark on Eevee’s Evolve button will change to a silhouette of Sylveon.

As with other Eevee evolutions, you can also get Sylveon by giving Eevee a specific nickname. In this case, change your Eevee’s name to Kira and you’ll be able to evolve it into Sylveon without having to earn any Buddy hearts. However, this method only works once, so you’ll only be able to evolve Eevee into Sylveon this way one time. If you’d like to add more Sylveon to your collection, you’ll need to evolve them through the aforementioned Buddy heart method.

The second part of the Luminous Legends Y event runs until May 31 and is themed around Eevee. As part of the event, other Eevee evolutions such as Flareon, Vaporeon, Jolteon, Espeon, and Umbreon will appear in three-star Raids, and you’ll have a chance to catch Eevee and some of its evolutions by completing event-exclusive Field Research tasks. You can read more about the event on the official Pokemon Go blog.

Sylveon isn’t the only new Pokemon introduced as part of the Luminous Legends event. The panda Pokemon Pancham was also added to the game during the first part of the event, while Yveltal is appearing in five-star Raids. The Legendary Destruction Pokemon will be available throughout the entire event.