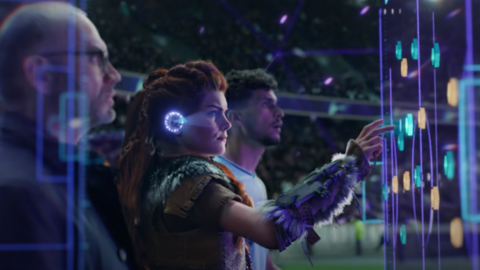 A new TV advertisement in the UK features characters from a variety of PlayStation games– including Kratos and Atreus (God of War), Aloy (Horizon), Nathan Drake (Uncharted), and Ratchet & Clank (Ratchet & Clank)–joining the UEFA Champions League.

VGC reports that PlayStation has been a sponsor of the Champions League for more than 20 years, and this latest trailer is just the latest example of the two companies working together.

The video shows Aloy managing her team, Drake climbing to the rafters of the stadium, and Ratchet & Clank hurtling through a portal to help an injured player. Kratos and Atreus are leading the opposing team out onto the pitch. Here’s the video:

In other news, Sony just recently announced that it shipped a further 3.3 million PS5s during the last quarter to reach a total of 13.4 million so far. The system is expected to be a very in-demand holiday gift this season, though getting your hands on one might be difficult to do.

One of the biggest games of 2021, Call of Duty: Vanguard, will feature a range of PlayStation-exclusive content as part of Sony’s ongoing partnership with Activision.