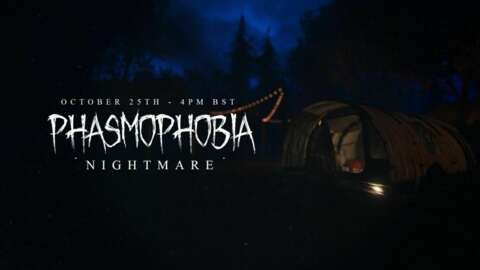 In a fitting move for a game that’s all about hunting ghosts, Phasmophobia is releasing a huge “Nightmare” update, just in time for Halloween. The biggest new addition is a new campsite map called Maple Lodge Campsite, with the update also adding a handful of new ghost types, a rework to the way the game handles difficulty, and more.

The new Maple Lodge Campsite is a medium-sized map that combines indoor and outdoor areas–you’ll be able to explore picnic areas, a number of tents, a log cabin, and an eerie haunted lake. The developer warns that the map is one of the most detailed yet, which means outdated computers may see FPS drops when loading up the new map. The new map also adds a new truck mini-map design, which the update notes say will be the standard for further mini-map updates rolling out later on other maps.

Four new ghost types have been added with the new update, and players will have a higher chance of encountering one of the new types for the duration of the Halloween event. The new ghost types are named Onryo, The Twins, Obake, and Raiju.

The update has also added a new feature in the form of weather, with each new contract now loading in with a different weather event in play. This can be one of six different weather events–clear skies, fog, light rain, heavy rain, strong wing, or light snow. Each will have a unique effect on different elements of players’ ghost hunts.

The last bit of new content being added for Halloween is a brand new Nightmare-level difficulty, designed to provide an extra challenge for seasoned ghost hunters. This new difficulty level comes on top of a broader overhaul of the game’s existing three difficulty levels, which was designed to make the game more enjoyable for players at any skill level.

Other than the new additions, a number of big tweaks and fixes have been made to the game’s existing features. You can check out the full patch notes below:

All difficulties have received a major overhaul. We hope these changes make each difficulty feel more unique, and provide more options for players of every skill level.

A new difficulty for the top ghost hunters, designed to be a challenge mode for those seeking the most intense gameplay Phasmophobia has to offer.

Each time you start a contract, the location will have different weather, adding new layers of gameplay and making each contract feel unique. Change in temperature will make finding the ghost’s location more difficult, rain or wind will impair your hearing, and a thick fog will reduce visibility.

The Ouija Board didn’t make as much sense as we’d like, so it’s been revamped. You now trade Sanity for information, and are penalized less if you don’t get a response.