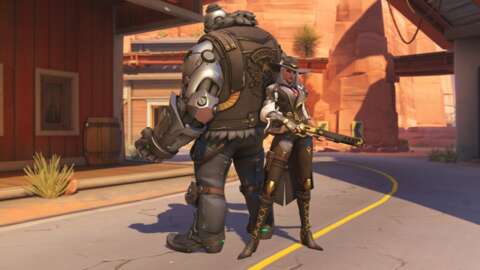 Overwatch is at long last getting cross-play across PC, Xbox, PlayStation, and Nintendo Switch, uniting the game’s community and, hopefully, resulting in shorter matchmaking time for players.

Players will need to connect their Xbox, Nintendo, or PSN account to Battle.net. Doing so will allow players to group up with friends regardless of platform for Quick Play, Arcade, and Custom games. Console players across Xbox, PlayStation, and Switch will be able to play Competitive matches together, while PC players can only play with fellow PC users when it comes to Competitive. Cross-play will be enabled automatically for players on PC. Players can opt out of cross-play should they so choose.

Coinciding with the launch of cross-play is the limited-time Ashe’s Deadlock Challenge, which offers unique rewards for both playing and watching Overwatch. Playing 27 games during the challenge’s duration will score players a new Legendary Ashe and B.O.B. skin. And if 27 games sounds like a lot, don’t worry–winning a game counts as two matches played. Players can also watch up to six hours of Overwatch on Twitch to score some new sprays.

A new Ash-focused Overwatch novel from author Lyndasy Ely titled Deadlock Rebels released June 1 and details the founding of the gang while exploring the origins of both Ashe and McCree. A free preview of the book’s first chapter is available now. Here’s a brief synopsis of what to expect:

“When Ashe is arrested yet again on the morning of her high school graduation, her aloof, old-money parents decide to disinherit her from the family fortune. To steal back what’s rightfully hers, Ashe teams up with her omnic butler, B.O.B., and local ruffian Jesse McCree for a series of heists, catapulting the trio into a game of fast money and dangerous alliances. Along the way, Ashe discovers that family isn’t just about blood. It’s about the people who’ve got your back when your back’s against the wall.”

The book’s first chapter is currently available to preview for free. Blizzard has also debuted one of two new variant covers from Afua Richardson for the #1 issue of the Overwatch: Tracer–London Calling comic series. Both covers will be available to purchase exclusively during Free Comic Book Day on August 14, 2021.

New details regarding Overwatch 2 were recently revealed during a livestream last month, including the news that the game could be switching to a 5v5 format. The original Overwatch will be getting Overwatch 2’s PvP maps and new heroes for free, with players essentially only having to pay for Overwatch 2’s PvE co-op content. Whether or not Overwatch 2 will also support cross-play remains to be seen.