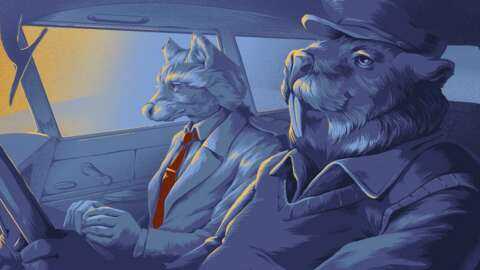 Fans of the detective game genre can look forward to the release of Backbone on June 8, which puts players in the boots of world-weary private investigator Howard Lotor. Rendered in a high-resolution pixel art style, Howard has to investigate a version of Vancouver that has gone to the dogs, as well as several other breeds of anthropomorphic animals who inhabit a city that can best be described as a dystopian Zootopia.

And in case you’re wondering, yes Howard is also part of this animal kingdom as he happens to be nature’s favorite trash panda, the raccoon.

Howard’s hunt for the truth seems to contain all the hallmarks that you’d expect from a noir mystery game, as well as a few extra special effects such as dynamic lighting to enhance the game’s visuals. The moody jazz soundtrack’s not too bad either.

If you’d like a taste of Backbone then you can download its first act for free. Backbone: Prologue was originally released in 2019, so it’s not entirely indicative of all the other improvements that have been added to the full game since then, but it’s a solid primer that’ll introduce you to some sneaking, mystery-solving, and evidence collecting.

Backbone will launch on PC for Steam, GOG, the Microsoft Store, and Epic’s storefront. It’s not the first noir-inspired detective game to swap humans for animals, as that specific sub-genre has a few other entries inside of it already such as Blacksad: Under the Skin, Sam & Max, and the extremely hard-boiled Chicken Police: Paint it RED.