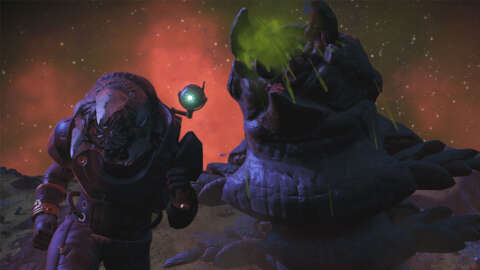 Hello Games has announced a new Halloween event for No Man’s Sky in the form of Expedition Four: Emergence. The seasonal event, which begins today, will feature a new narrative — the first the game mode has had — as well as several gameplay features and enhancements.

In Expedition Four: Emergence, players will find themselves stranded on a planet called Wasan, which has been “ravaged by dust storms” and “infested with Titan Worms”. Players are tasked with locating the Titan Worm impact sites, destroying Hungering Tendrils and collecting Vile Spawn that’s left behind. Cleansing the planets of “cursed dust” and sandworms will eventually unravel the dark narrative to the player and unlock exclusive rewards along the way.

Alongside the new Expedition, the update also brings with it an assortment of new gameplay features, including a varied collection of sandworms that players will encounter as well as revamped particle effects for meteors, muzzle flashes, explosion, burrowing fauna dust, billowing smoke, and laser impacts. Following on from the companions update that was released earlier this year, the game will also add the ability to tame and grow a sandworm companion to feed, pet, ride, and explore the universe with. They can also fly.

Additional features include the Ghastly Trail customisation option for the player’s Jetpack exhaust nozzles, which will apply an organic, gooey fluid effect when in flight, while the Flesh Launcher firework will explode with slime, phasma, and worms. Other customisation items include the Titanic Trophy skull of a sandworm for decorating your base, a Feasting Casque helmet, and more.

The developer also unveiled some new No Man’s Sky merchandise that has been added to its official store, including a special anniversary pin and a beanie hat.

Update 3.70 is available now for free on all platforms.