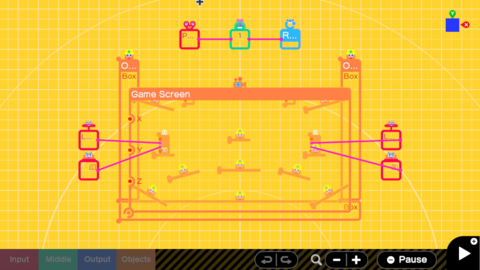 Nintendo has emphasized how you can become a game developer with the help of the Game Builder Garage software on the Nintendo Switch. Nintendo shared another brief 30-second trailer ahead of launch about the easy-to-learn aesthetic of Game Builder Garage showing off some unique characters. This new game design and programming software will take you through visual, step-by-step interactive lessons while making it entertaining with the help of Nodon.

The Nodon are adorable characters introduced in Game Builder Garage that act as programming nodes. You can assign different attributes to various Nodon such as adding textures, buttons functions, effects, timers, and more. For example, there is an adjustable Object Nodon that wears a yellow construction hard hat which creates objects in the game you’re designing.

Eventually, players can make their own games using Free Programming. This allows players to customize their game with backgrounds, music, and even draw their own characters. It’s a playful yet educating concept similar to Nintendo Labo, Super Mario Maker, and even Lego Super Mario.

You won’t have to keep your creations to yourself; you can play or work on games with others, too.

Game Builder Garage launches on June 11 on the Nintendo Switch.