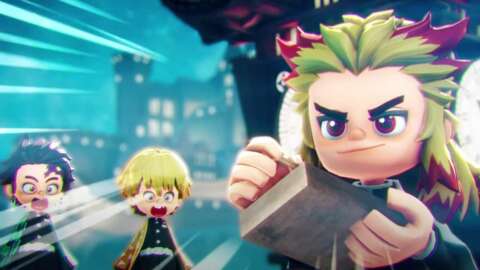 The developers of Ninjala have announced a special collaboration event with the anime Demon Slayer, in honor of the the “ninja-gum” game’s first anniversary. Exclusive to Nintendo Switch, Ninjala features Splatoon-style gameplay and was released in June 2020–which had a memorable West Side Story-themed launch trailer. The Demon Slayer collaboration event will take place in Ninjala from July 19 to August 30.

In the crossover event, you can play as a total of nine characters from Demon Slayer, including Tanjiro, Nezuko, Rengoku, and Tomioka. Antagonists, like powerful demon Muzan Kibutsuji, will also be available. Tanjiro’s character will also receive a unique gum bottle design. Get a peek of the Demon Slayer characters in Ninajala below.

Seven different skins for katana class will be available and all are designed based on each character’s weapon from the anime. For collaboration emotes, you’ll be able to receive Tanjiro’s First Form: Water Surface Slash, Rengoku’s Second Form: Rising Scorching Sun, and Zenitsu’s First Form: Thunderclap and Flash / Sixfold.

There will also be nine gum utsusemi that you can morph into and lay as a trap. Tanjiro, Nezuko, Rengoku, Tomioka, and Muzan are among the selections. A tournament will also take place during this event, and give special ippon decorations, emotes, and ninja gum based on ranking.

In other news, the trailer for Ninjala’s season six is out and a new battle royale mode will be added soon as well. Season six will follow a superheroes and villains storyline, and give new gum weapons and shinobi cards. The new Ninjala battle royale mode will be added during season seven and is called Last Ninja Standing. It’s a Hunger Games set up where players who get knocked out will not be able to respawn.