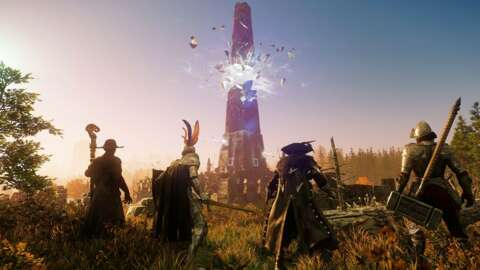 Free New World server transfers have been delayed, with developer Amazon Games citing the discovery of “some edge cases where the transfer experience does not meet our standards for its release,” as the cause of the delay. When server transfers do arrive, however, they won’t allow for region changes, something that is causing a headache for more than a few players.

New World’s launch saw most servers suffering from long queue times, with players waiting hours to log in. To fix the problem, Amazon encouraged players to create characters on newly created, low population servers, with the promise of free server transfers down the line that would allow players to find a more permanent home once the game’s servers and queue times stabilized.

No new date for server transfers has been offered following the delay, but community manager Trevor Smith did break down exactly how the transfers would work.

To transfer servers, you’ll need to do the following steps:

Players will keep everything they’ve earned so far when transferring. That means all items in a player’s inventory, their faction reputation, their currencies, their houses, their character progression, and quest progress will all carry over.

The main sticking point for many players is that characters in one server region cannot seemingly be transferred to a server in a different region. That clarification comes following an earlier tweet from the official New World Twitter account that stated players would, in fact, be able to transfer between regions.

Yes, you can move between regions if you want.

That no longer appears to be the case, with Amazon stating in an official server transfer FAQ on the game’s forums that the “original information provided” on the subject was “incorrect.” Players won’t be able to transfer between regions, like taking a character from a US East server to a US West server, for example. It’s a big issue for European players in particular, many of whom made characters on North American servers following massive queue times on European servers, with the intention of transferring back to European servers at a later date.

Amazon has since clarified that characters in different regions are stored on different databases, and that while initially the team believed data transfer between regions would be possible, that wasn’t actually the case.

Many players on the game’s forums are now feeling like they’ve lost all their progress, having played for dozens of hours on a server in a different region thinking they would be able to transfer later. Some are calling for some kind of double XP boost once server transfers are live or other reparations for lost time for those who will be making new characters, but it’s currently unclear what Amazon Games will do to make the situation right with players.

New World Is Getting Halloween Costumes