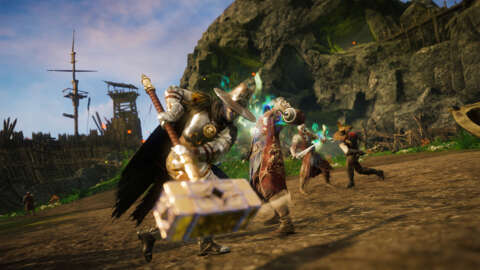 There has been a fresh round of reports of Amazon’s MMO New World causing graphics cards to either crash or fail completely. A similar issue occurred during the beta for New World during which RTX 3090s were bricking, possibly due to the settings menu having an uncapped framerate. The issue seemed limited to EVGA cards, which were promptly replaced.

As reported by PC Gamer, it seems as though the EVGA RTX 3090 FTW Ultra card and the Gigabyte RTX 3080 Ti are reportedly having issues, in some cases. These reports, alongside some graphics cards crashing, have popped up on Reddit and the New World forums. PowerGPU also put out a tweet stating that it has begun receiving reports about failing GPUs.

When asked for comment, an Amazon representative said it didn’t have additional information on the issue,

Winfuture (via PC Gamer) reported that it has had issues with a Gigabyte RTX 3090 because of various processes in the game that can reportedly put extra strain on the card. These spikes cause the GPU to max out and in the case of Winfuture, brick the graphics card. One of the areas where this occurs seems to be the settings menu. Whenever a graphics setting is changed the game does a hard refresh and reloads the whole scene again, reportedly putting extra strain on the GPU.

It’s important to note that the EVGA cards that were replaced during the beta were found to have manufacturing issues, something that was not present in every card. When asked for comment on the new cases, an Amazon representative said it didn’t have additional information on the issue, and pointed back to EVGA’s previous statement.

Amazon’s New World has gotten off to a strong start, however, it has had server issues and long queue times. Amazon announced that it hit 1 million players at launch and it is working to increase server capacity.