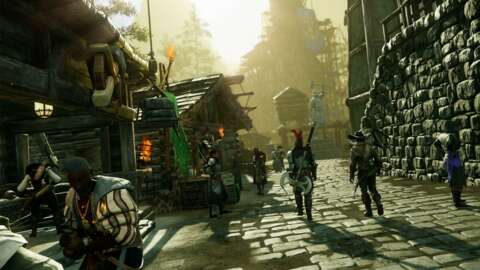 There is currently no way to trade in-game gold between other players or sell items on the auction house in New World, as a gold duplication bug has led developer Amazon Games to completely disable all methods of wealth transferring until the exploit is fixed.

Players can earn gold (called “coin” in New World) either by breaking down unwanted items, completing quests, or selling items to other players via the game’s auction houses (called trading posts). That gold can then be used to purchase items from other players, buy homes, or pay various taxes. Players can also deposit their gold into their company’s (New World’s versions of guilds) treasury, which can be used by company leaders to maintain settlement upkeeps or fund various war efforts.

Except, none of that is possible right now thanks to the current coin duplication exploit. Amazon, naturally, is not disclosing how exactly the exploit works in its official forum post on the topic, but it has disabled all means to move gold between players as a result, including trading directly with other players, posting items on the trading post, or depositing and withdrawing money from company treasuries.

There has been no word yet on when the exploit might be fixed, but it has been nearly 24 hours at the time of writing since wealth transfer in the game has been offline. Amazon says players who use the exploit will be punished.

The gold duplication bug isn’t the only major exploit players have discovered in recent days. Another recent exploit, which Amazon has already released a patch for, saw players becoming invincible when combining a certain weapon ability while playing in windowed mode and dragging the frame.

New World’s launch saw massive queue times and huge concurrent player counts, resulting in Amazon offering free server transfers. Login times have largely been fixed, and while the game’s player count has decreased since launch, Amazon’s MMO can still be found among the most played games on Steam.

New World Is Now Even More Of A Grind, And Players Aren’t Happy

Some New World Servers Are Time Traveling, And It’s Causing All Sorts Of Issues