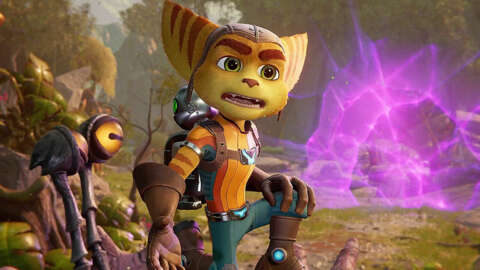 Developer Insomniac has just released a new cinematic trailer for Ratchet & Clank: Rift Apart, and it serves as a solid introduction to the game’s plot. Narrated by the character/weapon Zurkon Jr., the video gives players some quick hits of what to expect from the upcoming PS5-exclusive adventure game.

Packaged into just a minute, Zurkon Jr. explains the set up of the game: Ratchet, a lombax, and his robot sidekick Clank, are tasked with saving the world from an evil villain, Emperor Nefarious–an alternate-dimension version of the main enemy throughout the Ratchet and Clank series.

For the first time in the series, Ratchet will be joined by another lombax, Rivet (again due to the alternate dimensions in Rift Apart). The video also briefly mentions the inclusion of pocket dimensions, side areas that feature mishmashes of other levels or physics that defy “normal” rules, as well as puzzle levels that have players take control of Clank.

Ratchet & Clank: Rift Apart launches on June 11 and is one of the first big PS5-exclusive releases. In addition to expanding the arsenal of weapons, the game also virtually eliminates load times by leveraging the PS5’s internal SSD. Insomniac also recently revealed Rift Apart’s trophy list. Be sure to read our Ratchet & Clank: Rift Apart preorder guide, and if you want to learn more about what you’ll be doing in the game, check out GameSpot’s extensive preview of Rift Apart.

How PS5 Gives You Those Game Activity Estimates