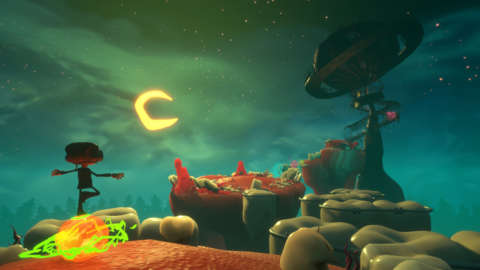 Double Fine has announced a brand-new patch for Psychonauts 2 that will add various quality of life features to the game. The patch makes it easier to 100% the game for Achievement and Trophy hunters, especially by adding new tools for finding the remaining collectibles.

Lead designer Seth Marinello went through them in a new video. The first one is an Otto-Shot filter that is available for the psychic camera that Raz can get from Otto in his lab. This filter helps find collectibles after you’ve finished the game by highlighting them in yellow lines within the camera’s vicinity. The filter can be purchased at Otto-matics for 75 Psitanium.

Additionally, fast travel menus inside mental worlds now have checkmarks. If you’ve found every collectible within an area, there will be a checkmark at the top right of the menu indicating so.

Lastly, there’s a quest that involves Gisu asking you to vent Psychoseismometers around the real world. If you’ve finished that quest, it will now unlock an additional Psychoseismometer in Otto’s lab. This allows you to engage in combat encounters over and over again. These fights include enemies that are associated with unlocking certain trophies and achievements.

The new Psychoseismometer will provide a nice challenge for those who’ve also reached Rank 102 as well as unlocked the final Clairvoyance upgrade, Limitless. This upgrade which removes all cooldowns for abilities.

In GameSpot’s Psychonauts 2 review, Kurt Indovina said, “It’s an emotional, hilarious, and, at times, devastating story, but a story about forgiveness and second chances. It’s an astonishing achievement in nearly every regard and the quintessential display of Double Fine’s mastery in story, gameplay, and distinct direction, making it the studio’s best game to date.”

Psychonauts 2 is available on PC, PlayStation 4, Xbox One, and Xbox Series X|S. It is also included in Xbox Game Pass.

Psychonauts 2 Is Only $30 For Black Friday