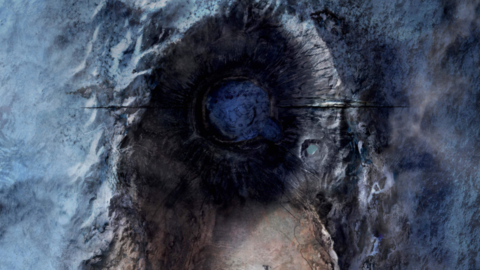 As part of BioWare’s N7 Day festivities, the developer has released a piece of teaser art for the next Mass Effect game. The striking artwork shows a massive crater on an alien world, and it seemingly contains a series of clues about its plot and characters.

A ship is in the foreground–not the Normandy but a new one with the letters SFX printed on it–and what appear to be multiple characters are standing nearby. They appear to be a Krogan, a. Turian, and an Asari. The teaser art also strongly suggests that the Geth will factor into the story in some capacity. The crewmates appear to be walking towards a Geth’s remains.

“Thank you all for being the best fans in the world!” BioWare said in its tweet where it revealed the new artwork.

Very little is known about the new Mass Effect game, so it’s very exciting to see this teaser art. Fans will surely have theories and more about what secrets it may be holding in the time to come.

The new Mass Effect game will be the first in the main series since 2017’s Mass Effect: Andromeda. EA and BioWare released the Mass Effect: Legendary Edition–featuring updated versions of Mass Effect 1-3–earlier this year and it sold better than expected.

For more, check out GameSpot’s full rundown of all the N7 Day news. Be sure to also watch our video above in which the Mass Effect Commander Shepard voice actors talk about their favorite lines from across the franchise.