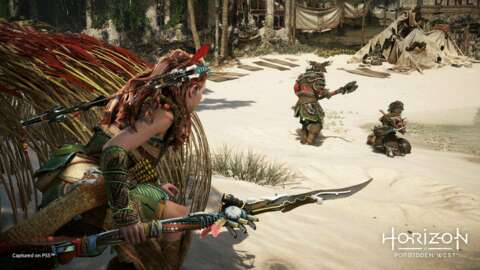 Sony has shared some new insight on one of its next big exclusives, Horizon: Forbidden West, and specifically around the new items, abilities, and weapons that Aloy will have at her disposal.

In a blog post, lead systems designer David McMullen spoke about how the sequel gives Aloy a number of new options for how she can move through the world. “Aloy can climb freely on and across huge sections of rocky terrain; even more machine types can be used as mounts; grapple points can be found throughout the environment which allows agile vertical traversal; swimming underwater has opened up a whole new aspect of exploration; and gliding with the Shieldwing provides the ultimate view of the beautiful world of Horizon Forbidden West–not to mention a quick way down from great heights!” McMullen said.

McMullen said every decision about Forbidden West’s traversal design setup was made to help Aloy have a greater sense of “dynamic interactivity” with the world, and this is achieved in a number of ways. “This could be to empower the player to manipulate and destroy their environment with a tool like the Pullcaster; or grapple-launching into a glide with the Shieldwing to set yourself up for a strike from above. What excites us most is how our mechanics, new and old, synergistically interact with each other to provide varied and dynamic approaches to any scenario,” McMullen said.

This new design philosophy altered how Guerrilla thought about level design, and the end result is a game world that is more open and features more possibilities.

“Traversal puzzles won’t always have a binary solution; we encourage players to experiment and have fun with the new tools. We will offer a variety of challenges, regardless of playstyle or skill or previous experience in Horizon Zero Dawn,” McMullen said.

On PS5 specifically, Forbidden West makes use of the DualSense controller to help people “feel” the game more than before.

“From the scrape of rubble as you push a crate, to the sensation of an unravelling winch as you use the Pullcaster–with the increased adaptive trigger tension as you pull,” McMullen said. “We’ve also added extra tactile dimensions to increase both the gameplay value and the feeling of being part of the world Aloy is moving around in; these can be subtle as the sensation of grass brushing around you to indicate you are entering stealth grass, or the pop of the adaptive trigger as you reach maximum draw with a bow. We even use the absence of adaptive tension to help communicate when you’re out of ammo.”

Guerrilla has also expanded the game’s free climbing system to allow players to simply see a surface and climb it, not unlike how it works in The Legend of Zelda: Breath of the Wild. Not every piece of terrain is climbable, however, as it’s limited to “where it makes sense visually and narratively,” the studio explained.

Also in the blog post, Guerrilla spoke about how Aloy now has a “high vault” ability, which allows her to climb on top of an object and grab it with her hands. “Combined with the ability to free climb and adding grapples to our environment, the potential for exploration is greatly increased,” the studio said.

Guerrilla also spent some time talking about the new items, the Pullcaster and the Shieldwing. The Pullcaster is a mechanical device that is mounted to Aloy’s wrist. It has two main functions, one of which is to serve as a grappling hook of sorts. The other function is a winch, meaning it can be used to move and crush objects. “Think about pulling a hidden loot chest from a ledge, or tearing open a vent to create a new climb path,” the studio said.

The Shieldwing, meanwhile, can be used to safely float down to the ground after climbing a mountain (also similar to Breath of the Wild). “The Shieldwing combines well with numerous other mechanics both in and out of combat, such as landing on your mount, ziplining, the strike from above skill, and more,” the studio said.

The blog post also touches on some of the changes to combat in Forbidden West. Lead combat designer Dennis Zopfi said one overaching goal was to give players more freedom to choose how they wanted to approach a battle. “We wanted to give players more tools, depth and dials to play with,” Zopfi said. “One entirely new concept in Horizon Forbidden West is the workbench, where you can upgrade and strengthen weapons and outfits. This unlocks new perks, mod slots, skills, and offers a bigger degree of customization, resistances, and new abilities for players.”

Forbidden West also has a skill tree that is “completely redesigned” from the first game. There are more tracks and skills, and skills can “synergize” with other skills for greater effect.

Zopfi also discussed one of Aloy’s new weapons, the Resonator Blast. Aloy can charge up the spear with melee hits; when it’s powered up, the collected energy can be dispatched onto human and machine enemies, causing a “big damaging explosion.”

Additionally, Forbidden West has a feature called “Valor Surge,” and there are 12 of these in all.

“You unlock and upgrade them through the skill tree with skill points. There are three levels of each Valor Surge: the higher the level, the longer the charge up, but the more powerful the attack,” Guerrilla said. “It was also important to reward players who go into a melee situation, as it’s very dangerous to be so close to enemies, especially the machines. If you are skilled and daring, you can do some really good damage with these new features–just be careful.”

Additionally, some enemies can ride machines in Forbidden West, so players will need to keep a close eye out for attacks in this respect as well.

“In Horizon Zero Dawn, machine and humanoid encounters were very separate; they never really operated as a group against Aloy,” Guerrilla said. “The world has changed in Horizon Forbidden West, with more danger, more enemy factions, and more machines–and they can now fight together in groups, which poses a real challenge for our hero, and the player.”

As for other new weaponry, there is the Spike Thrower, which is a high-damage weapon that, “when thrown at the right moment, makes it easier to hit larger targets.” The Hunter Bow, Sharpshot Bow, and the Blast Sling all return from the first game.

Be sure to read the full blog post to learn even more about what’s new in Forbidden West. The game launches in February 2022 for PS4 and PS5–February 2022 is a very busy month for new games.

In other news, Sony is hosting a special State of Play broadcast this Wednesday, October 27, where it will show off third-party games.

Aloy From Horizon Is Coming To Fall Guys Next Week