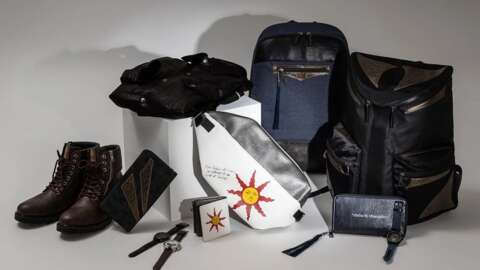 Super Groupies announced a new merchandise line based on Dark Souls, unveiling watches, bags, and clothing inspired by characters from the fantasy RPG series. The collection is split into four themes, each based on a different character from Dark Souls.

First off is Solaire of Astoria, the fan-favorite friendly knight from the original title. Fittingly, the line produced a $280 solar powered watch with a red-white color scheme, including a 24-hour display, 60-second and 30-minute counter-subdials, a calendar function, and a power reserve indicator. The line also offers a crossbody bag at $130 and a model wallet at $100. Both are emblazoned with the sun symbol of the knights of Astoria and Solaire’s intro phrase, “I am Solaire of Astora, an adherent of the Lord of Sunlight.”

Next are the noble blue-black tones of Astorias the Abysswatcher. Yet again, the line produces a watch, inspired by, and etched with, the design of Astorias’ armor. It prices at $300 and features a GMT sundial, allowing the wearer to check two different time zones. The set features a dark blue and black backpack for $150. The front pocket features the embossed pattern of Astorias’ armor. The final item in the Astorias set is a long wallet, inspired by the Abysswatcher’s cape, running for $110.

Lastly, the line has two clothing items inspired by Oscar, Knight of Astora. First is a vegetable-tanned leather jacket for $480. The back of the shirt jacket features an embroidered design based on Oscar’s shield. The last item in the collection is a pair of lace up boots, which run for $280. Side zippers allow the wearer to easily take the boots on or off and the soles are treaded to prevent slipping.

Each product is made to order. Items can be preordered from October 13 to October 31, with items expected to ship from late February to mid-March 2022. Keep in mind that preorders will cease when the numbers of orders hits a production limit, so preorders may close before the October 31 deadline. The line comes from the same company that worked on the high-end Halo Infinite clothing line earlier this year.