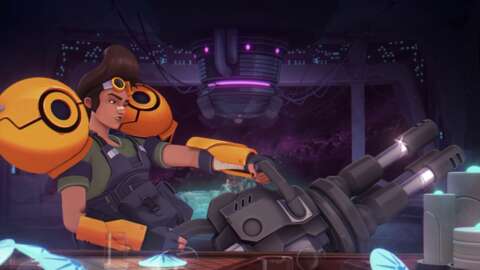 During Summer Game Fest, developer Amplitude Studios released a new gameplay trailer for its upcoming roguelike tower defense game, Endless Dungeon. In the trailer, character Zed walks you through the four necessary rules for surviving in the game.

The trailer also reveals a new character for Endless Dungeon. Throughout the trailer, Zed comments on the subpar performance of the three-person squad trying to follow her rules. In the squad, we see Bunker and Shroom are joined by someone else, who Zed taps in for at the end of the trailer.

The new character looks insect-like, possessing six limbs and multiple eyes. Like Zed, they carry a hefty-looking minigun. They look a lot like the drummer that performed in the band first seen in the announcement trailer for Endless Dungeon–maybe all the performers seen in that trailer are actually playable characters.

In Endless Dungeon, there are 12 playable characters from which you can form your squad of three. You can either control the whole squad if you want to tackle Endless Dungeon alone, or team up with two friends and each of you controls a separate character.

Endless Dungeon is the latest entry in the “Endless universe,” which also includes 4X strategy games Endless Space and Endless Legend. The game takes place in a derelict starship where a group of survivors work together in hopes of surviving an alien threat and getting home.