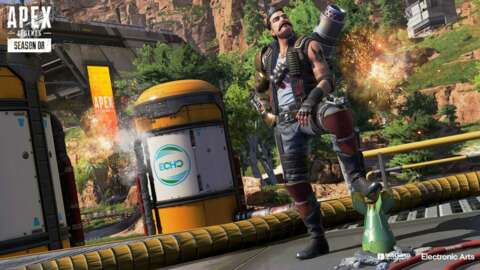 With its breakout success, it shouldn’t be a surprise that we’re starting to see Knockout City begin to cross over with other popular titles. For a limited time, Apex Legends players will be able to represent their love for the gym sport with a twist with a dodgeball charm.

According to a tweet from the official Apex Legends account, the dodgeball charm will be available from now until June 30. However, not all Apex Legends players will be able to receive the trinket. Only people that have subscribed to EA Play, EA’s paid gaming service, will be eligible to get a dodgeball for their favorite weapon in Apex Legends.

If you’re really dead set on getting a Knockout City-themed charm in Apex Legends but aren’t subscribed to EA Play, it’s not too expensive to get into. Players can subscribe to the service for a single month for $5, and get a charm, along with some games to play for a month as well.

Dodge 🔴
Duck 🔴
Dip 🔴
Dive and Dodge your way through the Outlands with the Knockout City-themed weapon charm. Available now through June 30 for all @EAPlay members. pic.twitter.com/Ql3L6WvabR

And if you’re looking for some extra ways to show your love for Apex Legends, the game’s art book is currently available for pre-order, with its launch set for November 9.

Likewise, Knockout City players will have some extra cosmetics to look forward to when the game’s Heatwave event starts on June 22. Running until July 5, players will be able to earn new items in the dodgeball brawler and play in two new game modes: Party Face-Off and Triple Team Chaos.

Knockout City is currently available on the Nintendo Switch, PC, Xbox One, PS4, and Xbox Series X. For those with a Game Pass subscription, Knockout City is free. For everyone else, the game is also free, but only up to level 25.