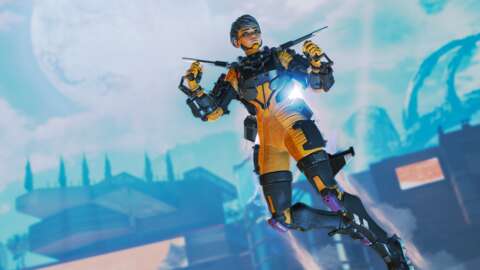 With the Apex Legends Global Series (ALGS) ramping up, developer Respawn is planning to implement an update that nerfs Valkyrie, the newest playable legend that was added in Season 9: Legacy. Respawn is removing Valkyrie’s ability to “tactical hover.”

At the start of Legacy, Reddit user Swogglenoz discovered that Valkyrie’s passive ability, VTOL Jets, consumed fuel at different rates depending on how you used it. For optimal hover time, you could activate Valkyrie’s tactical ability, Missile Swarm, and hold the rockets in without firing them, reducing her fuel consumption to 10 percent of its normal rate.

The tradeoff is that it slowed Valkyrie’s hover to a crawl–it basically made her a sitting duck. However, using this strategy in the final minutes of a match does allow Valkyrie to safely hover over fighting squads. Assuming they don’t notice her, she can remain airborne for a very long time and avoid most fights. It’s a strategy that players refer to as “tactical hover.”

Apex Legends associate live balance designer John Larson tweeted that Respawn did purposely design Valkyrie to be able to combine her tactical and passive abilities in this way. However, it’s a strategy the developer wants to remove so that ALGS competitors can’t take advantage of it.

“We figured we should remove this exception (we found [Valkyries] would often take coffee breaks above the final fight in scrims),” Larson wrote.

Personally, it feels like an unnecessary change. As mentioned before, Valkyrie is a sitting duck when she uses this strategy, as the legend’s jets are noisy and using them prevent her from using firearms or grenades. Given the fact that she also can’t move very fast while doing it, it’s not a regular go-to for using Valkyrie offensively or as a means of survival. The ability seemed geared towards Valkyrie’s role as a recon character, giving her a means of remaining airborne longer so that she could scout the area from the air.

According to Larson, the update that removes Valkyrie’s “tactical hover” will go live on Thursday, May 27.

Apex Legends Dev Forecasts A Content Dry-Spell For Next Month