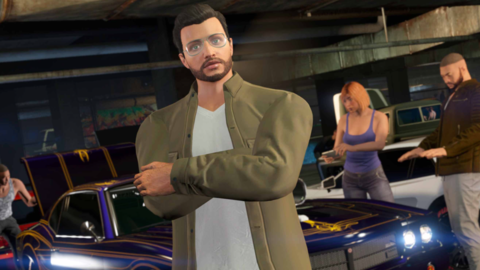 A Rhode Island man is making headlines this week after he confronted someone stealing a part on his car as he was playing Grand Theft Auto. Charles Kendrick of Pawtucket, Rhode Island was playing GTA naked at about 2 AM this week when he heard a sound outside his home. He stopped playing to go outside and have a look around, and then the drama ensued.

“I’m naked, I’m naked in my house. I’m relaxing,” he told local news affiliate CBS 21. “I come out of the house naked and sure enough, there’s somebody under my car.”

Kendrick confronted the man, who began swinging his reciprocating saw at him. A fight ensued. “I start fighting with the guy, wrestling with him. He ends up elbowing me, but I still grab onto him and I end up getting up his phone,” Kendrick said.

The would-be thief was attempting to make off with the catalytic converter on Kendrick’s car. Because of the valuable metals inside it, this car part is commonly sought after by thieves.

GTA Online remains immensely popular, years after release, as Rockstar continues to support the game with new content and expansions. Just this week, the game added GTA III anniversary DLC and a number of opportunities to earn extra XP. Looking ahead, Rockstar has teased an “exciting new adventure” for the game featuring familiar faces. Additionally, GTA Online is coming to PS5 and Xbox Series X|S as a standalone release in March 2022.